February 7, 2009
Wikipedia article
Flags of the World article
The current flag of Bolivia was promulgated by the decree of President Manuel Belzu in late 1851. The decree of 14 July 1888 described the Coat of Arms, and the flags for civil, state and military use. The 2004 decree described the same symbols as the 1888 document, but offered very detailed descriptions. According to one source, the red stands for Bolivia's brave soldiers, while the green symolizes fertility and yellow the nation's mineral deposits.

The Bolivian flag is a vertical tricolour (tierced in fess) of red over yellow over green, as defined by Article V of the 1888 decree and Article 1 of the 2004 decree.

Art. 1 of the 2004 flag law mentions the symbolism of the colors, as patriotic bloodshed, nature’s bounty, and verdure and hope.

In Whitney Smith’s Flags through he Ages and Across the World  the red is said to stand for the bravery of the Bolivian soldier, green is the fertility of the land and yellow represents the country’s mineral resources.

In Webster’s Concise Encyclopedia of Flags, 1985: The three horizontal stripes of the Bolivian flag — red, yellow and green — respectively symbolize the gallantry of Bolivian soldiers, the country’s mineral wealth, and the fertility of the land.The meaning of colors on flags is usually given after a flag is adopted; this was probably the case here, as they were derived from earlier flags of Colombia and her liberator, Simon Bolívar.

According to Webster’s Concise Encyclopedia of Flags, 1985, the flag with its present order of stripes was introduced in 1851 but a number of variations had been used since Bolivia gained independence in 1825.

State flag and state ensign. Frequently used by the civil people too. 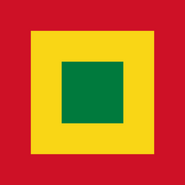 Naval Jack
Add a photo to this gallery
Wiphala FlagEdit

The Wiphala is a square emblem, commonly used as a flag, representing some native peoples of the Andes that include today's Bolivia, Peru, Ecuador and parts of Argentina, Chile and Colombia.

The suyu wiphalas are composed of a 7 × 7 square patchwork in seven colours, arranged diagonally. The precise configuration depends on the particular suyu represented by the emblem. The colour of the longest diagonal line (seven squares) determines which of the four suyus (regions) the flag represents: white for Qullasuyu, yellow for Kuntisuyu, red for Chinchaysuyu, and green for Antisuyu. There is also an alternate pattern for the Wiphala for Antinsuyu. Additionally a Wiphala also exists for Tupac Katari and the Tupac Katari Guerrilla Army.

Article 6, section II of the 2009 Bolivian constitution establishes the Wiphala as the dual flag of Bolivia, along with the red-yellow-green tricolor.

Redesign by SimplisticFlags. (details)
Add a photo to this gallery
Retrieved from "https://vexillology.fandom.com/wiki/Bolivia?oldid=26348"
Community content is available under CC-BY-SA unless otherwise noted.