The four wavy white and three wavy blue lines symbolize the province's location between the Pacific Ocean and the Rocky Mountains. The setting sun represents the fact that British Columbia is Canada's westernmost province. The sun may also reflect the provincial motto "Splendor sine occasu" (beauty that never diminishes) – or, in other words, the sun that never sets. The Union Flag on top reflects the province's British heritage, while the King Edward crown in the centre represents the Canadian Royal Family.

1988 (as an unofficial island flag)
Wikipedia article
Flags of the World article
The flag of Vancouver Island is a defaced Blue Ensign with the Union Flag in the canton, and the badge of the colony of Vancouver Island on a white disk on the fly. The design of this flag is based on the rules set out by the Admiralty for colonial flags in 1865, and elements from the great seal of the colony, created c 1849. However the flag itself likely never existed in the colonial period (1849-1866), but rather was re-created in 1988 as an unofficial local flag for Vancouver Island (now part of British Columbia).

I think it only needs waves. Design by Rotten Ali. 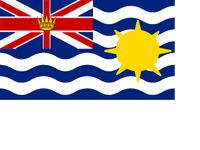 Based on proposal from HansLN.

Vancouver Island proposal by Strayberry, July 2018.
Add a photo to this gallery

Retrieved from "https://vexillology.fandom.com/wiki/British_Columbia?oldid=38999"
Community content is available under CC-BY-SA unless otherwise noted.