The Bear Flag is the official flag of the state of California. The precursor of the flag was first flown during the 1846 Bear Flag Revolt and was also known as the Bear Flag.

The first official version of the Bear Flag was adopted by the California State Legislature and signed into law by Governor Hiram Johnson in 1911 as the official state flag. The 1911 statute stated:

The flag of the governor of California consists of the seal of California centered on a field of azure. Like most U.S. governors' flags, there are four five-point stars at the corners of the field.

Proposals for a New Flag of California 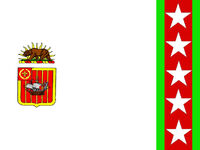 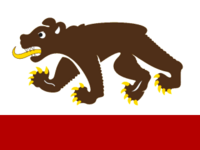 California State Flag Symplistic Proposal. This is the only flag with curves, because I wanted to convey the feeling of driving along the coastline. By Ed Mitchell. 2013.

The Political Bear. Basic design by some guy high up in politics - My rework - Rotten Ali

With Indication of a state split up, this design was shown, intitally without the number 51 in the fly. Design by Sutter County. I expect it would be moved to a new page if the state does split.

After a short public contest on the Facebook page of Flags and Vexillology, having brought together for study some 119 designs, this one was declared the winner and two fabric examples made. The I.P. was passed to the State of New California (in formation) on the 13th March 2018.

Green grass under the bear moved up to evoke a rotated Mexican flag, signifying California's historical and ethnic connection to Mexico. Golden circle representing the sun, on the left (West) side of the flag. By Dmitri McDonald, 2018.

Proposal for a flag for California. Make the bear more abstract and a bit bigger, make the grass part of the flag and increase the size of the star. By Qaz Dec 2019 (details)

(details)
Add a photo to this gallery
Retrieved from "https://vexillology.fandom.com/wiki/California?oldid=28569"
Community content is available under CC-BY-SA unless otherwise noted.