Mexico
The flag of the state of Chihuahua is, like most current Mexican state flags, the coat of arms centered on a white field.

The coat of arms' current design was officially adopted in 1983, although the main design was created in 1941 and adopted by the city of Chihuahua the same year.

The flowers on the upper section are apple tree flowers, which represent the state, as Chihuahua is the main apple producer in Mexico. The main body of the shield is divided into three asymmetrical sections outlined by a laurel wreath symbolizing the triumphs of the people of Chihuahua.

The bigger section on the top has a blue field for the sky and the three main hills of the City of Chihuahua: Coronel, Grande and Santa Rosa. Also included are a mining hoist, a portion of the aqueduct of the state's capital and a mesquite tree, all representative of the state.

The central section has a field with sixteen pieces, eight in silver and eight in red which represent the votes to and against the fundation of the City of Chihuahua and that resulted in a tie, over them are the faces of a Spaniard and a Tarahumara looking at each other which represent miscegenation. The lower section, with a blue field, the front of the Cathedral of Chihuahua in gold.

Proposals for new flag of ChihuahuaEdit

Civic version of the design by Daniel Martínez Miranda. 2009.

The three main ecosystems of the state: mountains, desert and Plains-Valleys. By kyrgyzzephyr. 2014.

Chihuahua flag - The black, red and sand colors are taken from the pre-hispanic cultures that inhabited the UNESCO World Heritage Site of Paquimé in northern Chihuahua. The layout of the flag is inspired by the basque Ikurriña, acknowledging Chihuahua´s colonial past as "New Biscay". The checkers on the upper right and lower left quadils represent the votes in favour and agaist the foundation of the capital city. Flag proposed by daviddelgadohh (2017).

Chihuahua flag based on the flag of the Basque Country (Spain) with the colors of the Mexican flag. The flag incorporates the checkers from the state's coat of arms

Five indigenous groups, a vote made in 1709 to found the state and a sandy land, represented almost in its entirety in the official coat of arms, make up the Flag of Chihuahua in a much more simplified manner. By Ricardo Vazoli, 2016.

Proposal for a flag for Chihuahua. By Qaz Dec 2019 (details) 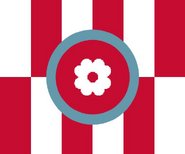 Retrieved from "https://vexillology.fandom.com/wiki/Chihuahua?oldid=33736"
Community content is available under CC-BY-SA unless otherwise noted.