Washington, D.C., formally known as District of Columbia, is the capital district of the United States; it's the headquarters of federal Executive, Legislative and Judiciary branches. Under exclusive jurisdiction of United States Congress, it doesn't belong to any US state.

Its current flag, whose author is Charles A.R. Dunn, was adopted in 1938 in a public competition. It is a rectangular version (a banner of arms) of the coat of arms of George Washington, the Independence War hero and first president of United States, for whom the city of Washington, D.C. was named.

The dimensions of the stars and stripes are specified by law:

Only in 1938 an official flag was chosen, in a public competition. The winner entry, by Charles A.R. Dunn, is still the official D.C. flag. The first time Dunn proposed the flag was in 1921.

In July 2002, the D.C. Council approved a change in district flag, by 10-2 vote (and one absence), in protest in favor of DC statehood. The referred proposal included the "DC" writing in central star, and the text "TAXATION WITHOUT" in superior red bar and "REPRESENTATION" in inferior one. However, the bill never was signed by the then-mayor nor the successors. 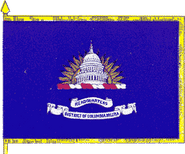 2002 "Taxation Without Representation" flag
Add a photo to this gallery

Washington DC Flag Symplistic Proposal. I kept the D.C. flag the same but changed the colors. The design is based on George Washington’s coat of arms. By Ed Mitchell. 2013.

Returned Detail. The original scheme was 3 red mullets - these should have holes in the centres as shown on the stained glass window. Also the stripes are re-spaced. Design by Rotten Ali.

District of Columbia flag proposed by Ken Morton. A somewhat obvious change to the district's current flag, but still, I think, an improvement.
Add a photo to this gallery

Retrieved from "https://vexillology.fandom.com/wiki/District_of_Columbia?oldid=40544"
Community content is available under CC-BY-SA unless otherwise noted.