Start a Wiki
The flag of Florida consists of a red saltire, St. Andrew's Cross, on a white background, with the state seal superimposed on the center. The design was approved by a popular referendum in 1900. The current design has been in use since 1985, after the state seal was graphically improved and officially sanctioned for use by state officials.

While both the modern Alabama and Florida state flags may have some historical tribute to Spanish rule in their design - both were definitely patterned after the battle flags of the Army of Northern Virginia (ANV)- under which the bulk of the troops from both states fought.


Both of these flags have documentation stating the influence of the ANV battle flags in their design - particularly the flag of Alabama - which was created under the administration of Governor William Oates. Oates was a former regimental commander in the ANV. He is most famous for leading the confederate assault on Little Round Top at the Battle of Gettysburg. [Text from http://www.crwflags.com/fotw/flags/us-fl.html#reddiagcross] 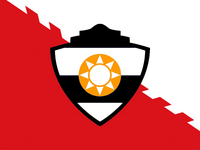 FL Flag Proposal by Kermitdefrog
Add a photo to this gallery

Many designs use an orange circle, that can represent one or both of these symbols: the Sun or a orange. Florida state has tropical and subtropical climates, the reason it's named "The Sunshine State". The orange refers to the fact citrus fruit, especially oranges, are a major part of the state economy. Florida produces the majority of citrus fruit grown in the United States.

Sometimes, the orange disc is substituted by other depiction of the sun.

Retrieved from "https://vexillology.fandom.com/wiki/Florida?oldid=7363"
Community content is available under CC-BY-SA unless otherwise noted.