The flag of the state of Hawaii (Hawaiian: Ka Hae Hawaiʻi) is the official standard symbolizing Hawaii as a U.S. state. The same flag had also previously been used by the Kingdom, Protectorate, Republic, and Territory of Hawaii. It is the only U.S. state flag to feature the Union Flag of the United Kingdom, a remnant of the period in Hawaiian history when it was associated with the British Empire.

The canton of the flag of Hawaii contains the Union Flag of the United Kingdom, prominent over the top quarter closest to the flag mast. The field of the flag is composed of eight horizontal stripes, symbolizing the eight major islands (Hawaiʻi, Oʻahu, Kauaʻi, Kahoʻolawe, Lānaʻi, Maui, Molokaʻi and Niʻihau). A ninth stripe was once included, representing the island of Nihoa. Other versions of the flag have only seven stripes, probably representing the islands with the exception of Kahoʻolawe or Niʻihau. The color of the stripes, from the top down, follows the sequence: white, red, blue, white, red, blue, white, red. The colors were standardized in 1843, although other combinations have been seen and are occasionally still used.

The flag used by the governor of Hawaii is a red and blue bi-color. In the middle of the eight white stars appears the name of the state in all capital letters. During the time Hawaii was a United States territory, the letters in the middle of the flag were "TH", which stood for "Territory of Hawaii".

The Kanaka Maoli flag consists of nine red, green and yellow horizontal stripes, with in its center a kahili and two crossed paddles on a green shield. It is claimed to have been the flag of the Kingdom of Hawaii before the adoption of the current flag, though its authenticity is disputed.

Proposals for a New Flag of HawaiiEdit 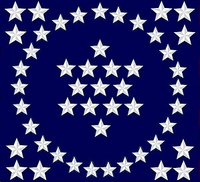 Hawaii State Flag Symplistic Proposal. I removed the Union Jack and kept the eight stripes, one for each of eight major islands. By Ed Mitchell. 2013.

Hawaii - design study [Posted by Ken Morton] I thought I was being clever, but, I see two other designers beat me to the punch. Kudos to them.

A 13-stripe reimagining of the Hawaii flag, in which the stripes of the main body have been altered to feed into the canton. The resulting pattern has a symbolic interpretation as volcanic islands bordered by white sands and separated by blue oceans. The pattern is also symmetric in that it reads the same from the top down as from the bottom up. Note that the Union Flag in the Canton has been altered slightly by extending its pattern rightward to better feed into the main body.

My version of proposals by Lord Grattan and others. Each of the the major Hawaiian islands has its own official color and these are represented in the flag: yellow (Oahu), pink (Maui), purple (Kauai), red (Hawaii), green (Molokai), orange (Lanai), gray (Kahoolawe), and white (Niihau). These colors are arranged horizontally like a rainbow, nodding both to historic Hawaiian flags and to rainbows, which are natural symbols of the state. Posted by Preston Knapp [1]

Proposal for a flag for Hawaii. By Qaz Dec 2019 (details)
Add a photo to this gallery
Retrieved from "https://vexillology.fandom.com/wiki/Hawaii?oldid=28642"
Community content is available under CC-BY-SA unless otherwise noted.