Mexico
The flag of the state of Hidalgo is, like most current Mexican state flags, the coat of arms centred on a white field.

The coat of arms was designed by Diego Rivera in 1922 and conceived by José Vasconcelos. The shield is horizontally divided into two parts. The top section shows a mountain which represents the mountains of Hidalgo as well as its mines. To the left of the mountain is a bronze bell, which symbolizes the Grito of Dolores, which proclaimed the independence. On its left is a red Phrygian cap with laurel branches, both symbols of freedom and victory, obtained in 1821. The lower field shows a war drum, which symbolizes the three most important social movements of Mexico: Independence, Reform and Revolution.

The supporters of the coat of arms are two crossed flags. The flag on the dexter side shows the image of the Virgin of Guadalupe (which symbolizes the independence of Mexico, because Father Hidalgo used a similar one when he started the insurgency), on a blue field. On the sinister side is the national flag of Mexico.

Pattern near the hoist based on the embroidery of the Otomi, one of the number of native and immigrant cultures in the state. A stylised Aztec pyramid represents the ruins of pre-Hispanic Hidalgo. Pickaxe represents the mining industry. By pure coincidence, these items together vaguely resemble a bell (which is on the coat of arms) which resembles a call to liberty. By kyrgyzzephyr. 2014.

The Flag of Hidalgo is composed by a bell, symbol of the insurgent movement and the national colours in the shape of rays coming from the centre. By Ricardo Vazoli, 2016.

Proposal for a flag for Hidalgo. By Qaz Dec 2019 (details)

Proposal for a flag for Hidalgo. By Qaz Dec 2019 (details) 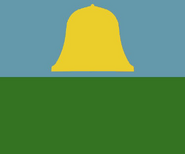 Flag of Hidalgo Yellow Bell is on the Top, Top is Blue and Green is Bottom, February 2020
Add a photo to this gallery
Retrieved from "https://vexillology.fandom.com/wiki/Hidalgo?oldid=40757"
Community content is available under CC-BY-SA unless otherwise noted.