The flag of the state of Idaho consists of the state seal on a field of blue. The words “State of Idaho” appear in gold letters on a red and gold band below the seal. According to the official description of the flag, there should also be a fringe of gold around the edges, but a long time ago the versions of the flag were not shown until they remodeled the flag after War.

The current seal contains the text "Great Seal of the State of Idaho" in the outer ring, with the star that signifies a new light in the galaxy of states. The inner ring contains a banner with the Latin motto, Esto perpetua ("Let it be perpetual" or "It is forever"). A woman, signifying justice, and a man, dressed as a miner, support a shield. The miner reminds us of the chief industry of the State at the time of statehood.

Inside, the shield bears images symbolic of the State. The pine tree in the foreground refers to Idaho's immense timber interests. The husbandman plowing on the left side of the shield, together with the sheaf of grain beneath the shield, are emblematic of Idaho's agricultural resources, while the two cornucopias, or horns of plenty, refer to the horticultural. Idaho has a game law, which protects the elk and moose, and an elk's head rises above the shield. The state flower, the wild Syringa or Mock Orange, grows at the woman's feet, while the ripened wheat grows as high as her shoulder. The river depicted in the shield is the Snake or Shoshone River.

In 2001, the North American Vexillological Association surveyed its members on the designs of all 72 Canadian provincial, U.S. state and U.S. territorial flags, combined. Idaho finished in the bottom ten, finishing 64th out of the 72.

Proposals for a New Flag of Idaho

Idaho State Flag Symplistic Proposal. There’s a gem in the canton because every type of gemstone is found in Idaho. The red represents the mountains and the blue is the sky. By Ed Mitchell. 2013.

The Gem of the Mountains Garnet Flag

Idaho - "I never change". Giant Letter I for Idaho. Based on the flag of Shaman Smohalla of the dreamer cult, who flew a flag over his house during the 1860's.. Thus somewhat joint design with Rotten Ali.

Plays on the few salvagable items from the current SOB. A white 5 point star, a blue bedsheet and the often seen 3 sides of gold braid. Design by RottenAli

Idaho flag proposed by Ken Morton. I have two tricolors for Idaho that I can't decide between. Here is version one: white for snow capped mountains, blue for rivers and lakes and black for Idaho's volcanic soil [Yeah, yeah, yeah. I know; Estonia.]

My version of design by "Usacelt" modified by Ben Karnell. The overall concept of the flag is to depict Idaho's nickname as the “Gem of the Mountains.” The colors of the flag are the state’s official colors. The star and red sky above the the snow-capped mountains represent the garnet, the state's gem. Posted by Preston Knapp [1] 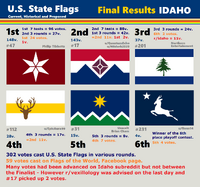 US State Flag contest result sheet. This was the 17th of the 25 planned contests

Proposal for a flag of Idaho. By Qaz Jan 2020 (details)
Add a photo to this gallery
Retrieved from "https://vexillology.fandom.com/wiki/Idaho?oldid=28929"
Community content is available under CC-BY-SA unless otherwise noted.