The current flag depicts the Great Seal of Illinois, which was originally designed in 1819 and emulated the Great Seal of the United States. In the eagle's beak there is a banner with the state motto, "State Sovereignty, National Union." The dates on the seal, 1818 and 1868, represent the year Illinois became a state and the year in which the Great Seal was redesigned by Sharon Tyndale. Although "State Sovereignty" comes first in the motto, Illinois was victorious in the American Civil War on the Union side, fighting against state sovereignty, so Tyndale placed "State" at the bottom and "Sovereignty" upside-down.

In 1918, Wallace Rice submitted a flag for Illinois's centennial celebration. Rice is best known for designing the iconic flag of Chicago. His centennial flag has 21 stars, representing Illinois's entry to the Union as the 21st state, on a white and blue triband.

Centennial flag (1918)
Add a photo to this gallery

Proposals for a new Flag of Illinois[edit | edit source]

IL Flag Proposal. I kept it simple and similar in design to the Chicago flag, one of the most well-liked city flags in the country (and rated #2 by the North American Vexillological Association). The blue stripe represents the Illinois River and two red stripes represent the two parts of the state motto, “State Sovereignty and National Union.” By Ed Mitchell of Bresslergroup, 2013

Updated Illinois state flag proposal. Illinois is an Algonquin word that means “warriors” or “tribe of superior men.” To represent the idea of a warrior I used the shield that appears on the current flag. The 13 stripes represent the 13 original colonies. Illinois is also nicknamed the “prairies state” — the red strip on the bottom of the flag is meant to represent the horizon line of a prairie. By Ed Mitchell. 2016.

Land of Lincoln flag by Newresnow

"Rich Rice" color set as per state colors. In similar layout as the Centenial Rice flag. Design by Rotten Ali.

As Chicago but single star has 21 points to represent order of admission. Design by Rotten Ali.

Illinois flag proposed by Ken Morton. Inspired by the Illinois Centennial Flag, and building upon a design by "Hans". 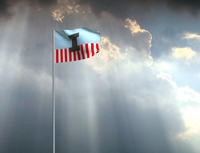 Redesign of the Illinois centennial flag. In place of the 20 stars, there is a chevron pattern representing the shield and red ribbon from the state seal. By Dmitri McDonald, 2018. 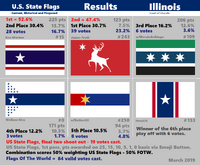 Results of the Illinois contest of March 2019 on Facebook. Win for Ken Morton's design.

Proposal for a flag for Illinois. This pattern is a kaleidoscopic shuffle of the Chicago star, and does not have a deeper meaning per se - it's just an attractive and recognizable pattern (but it is rather difficult to reproduce from memory.) By Qaz Dec 2019 (details)

Proposal for a flag for Illinois, displaying the stars of Springfield and Chicago, and the bald eagle. By Qaz Dec 2019 (details)

Based on the centennial flag.

Based on the Centennial Banner and the flag designs made by Hans and Ken Morton. A large star is placed between 10 stars on either side of it, making it 21 in whole symbolizing Illinois's status as the 21st state to join the Union. Made by Ceasingmango426. August 2020.
Add a photo to this gallery

A number of proposed designs take elements from two local flags: the municipal flags of Chicago and Springfield. Both happened to be designed by men named Wallace in 1917.

The Chicago flag by Wallace Rice is one of the most popular local flags in the country. Its three white areas represent the North, South, and West sides of the city, separated by the branches of the Chicago River. Wallace's original had two distinctively shaped, red six-pointed stars, which later grew to four. They represent four major events in Chicago history: the founding of Fort Dearborn in 1803, the Great Chicago Fire in 1871, the World Columbian Exposition in 1893, and the World's Fair of 1933.

The Springfield flag was designed by S.T. Wallace. Its 21 stars commemorate Illinois's position as the 21st state in the Union. The large white star in the center represents Illinois itself, and the red star within it represents Springfield. The flag today also includes the name of the city, but this was not part of the original design and is not specified in the city's Code of Ordinances.

Retrieved from "https://vexillology.fandom.com/wiki/Illinois?oldid=38099"
Community content is available under CC-BY-SA unless otherwise noted.