The flag of Kansas was designed in 1925. Officially adopted by the Kansas State Legislature in 1927 and modified in 1961 (the word "Kansas" was added below the seal in gold block lettering). First flown at Fort Riley by Governor Benjamin S. Paulen in 1927 for the troops at Fort Riley and for the Kansas National Guard.

From 1925 to 1927, Kansas used a state banner instead of a flag. The Kansas state banner, which consisted of a large sunflower and the word "Kansas" on a blue field, was intended to be hung from a horizontal bar, rather than a vertical flag pole. It was given a unique design to avoid "competition" with the United States flag. However, after the banner was rejected for display in Washington, D.C., and generated complaints for its awkward method of hanging, the state legislature adopted a state flag that saw the addition of the word "Kansas" at the bottom in 1961 but has otherwise retained its original design.

According to the North American Vexillological Association (NAVA), the state banner exists today as an official alternative to the state flag. The organization's website features the banner – a lone sunflower on a blue field – and attributes it to Adjutant General Joe Nickell. However, the Kansas State Historical Society describes the same design as a flag submitted by Albert T. Reid before the state banner was adopted, and makes no mention of its status as an alternative flag.

NAVA named the flag of Kansas the fourth worst flag out of all the flags of the provinces of Canada, the U.S. states and U.S. territories. It was named 69th best out of a field of 72.

Proposals for a New Flag of Kansas 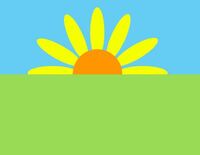 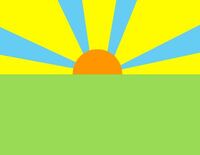 Kansas State Flag Symplistic Proposal. I kept Kansas simple and used the state flower, the wild sunflower, as the main element. The star in the middle represents the state itself. By Ed Mitchell. 2013.

Kansas Flag Proposal by TheMaster001
Add a photo to this gallery
Retrieved from "https://vexillology.fandom.com/wiki/Kansas?oldid=15494"
Community content is available under CC-BY-SA unless otherwise noted.