2004, first documented use 1410
Wikipedia article
Flags of the World article

The flag of Lithuania (Lithuanian: Lietuvos vėliava) consists of a horizontal tricolor of yellow, green, and red. It was adopted on 25 April 1918 during Lithuania's first period of independence (in the 20th century) from 1918 to 1940, which ceased with the occupation first by Soviet Russia and Lithuania's annexation into the Soviet Union, and then by Nazi Germany (1941–1944). During the post-World War II Soviet occupation, from 1945 until 1989, the Soviet Lithuanian flag consisted first of a generic red Soviet flag with the name of the republic, then changed to the red flag with white and green bars at the bottom.

The flag was then re-adopted on 20 March 1989, almost a year before the re-establishment of Lithuania's independence and almost three years before the collapse of the Soviet Union. The last alteration to the current flag occurred in 2004, when the aspect ratio changed from 1:2 to 3:5.

The earliest known flags with a Lithuanian identity were recorded in the 15th-century Banderia Prutenorum, written by Jan Długosz. At the Battle of Grunwald in 1410, two distinct flags were present. The majority of the 40 regiments carried a red banner depicting a mounted knight in pursuit. This flag, known as the Vytis, would eventually be used as the Lithuanian war flag, and again in 2004 as the state flag. The remainder of the regiments carried a red banner displaying the Columns of Gediminas. Those that bore the Vytis, also known as the Pahonia, were armies from the Grand Duchy of Lithuania, while those who bore the Columns of Gediminas were from noble families of Lithuania. Until the end of the 18th century, when it was annexed by the Russian Empire, the Grand Duchy of Lithuania used the Vytis as its flag.

Battle flag with the Vytis, 1410, reconstruction

The yellow-green-red stripes of this flag were attributed symbolism relating to the national traditions of the Lithuanian people. Ripening wheat and freedom from want are suggested by the yellow, and green is for hope and the forests of the nation. Red stands for love of country, for sovereignty, and for the courage and valour that keep the flame of liberty burning.[2] 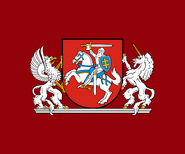 Standard of the President of Lithuania

Flag of the Lithuanian Army with Columns of Gediminas

Air Force Ensign of Lithuania
Add a photo to this gallery

Łobez city, Poland
Former flag looked almost the same except tones of colors were different. It was changed in 2017 to this.
Add a photo to this gallery

The adoption of the current flag of Myanmar in 2010 caused controversial reactions in Lithuania. Then-Prime Minister of Lithuania Andrius Kubilius said: "There are similar flags, take a look at Scandinavian example - there are lots of similarities. So I doubt whether we will express any copyright claims, we don't have any star. We had stars and we don't need then anymore."

Lithuania flag proposal 2 by Hans. Nov 2018. (details)
Add a photo to this gallery

Retrieved from "https://vexillology.fandom.com/wiki/Lithuania?oldid=27084"
Community content is available under CC-BY-SA unless otherwise noted.