The flag of Louisiana consists of a heraldic charge called a "pelican in her piety," representing a mother pelican wounding her breast to feed her young from the blood. This symbol, emblematic of Christian charity, is also found on the state seal. On the flag it is depicted above a ribbon with the state motto: "Union, Justice, and Confidence". The current flag was adopted in 2006, revising the original pelican design of 1912.

During the 19th century it was traditional in Louisiana flags and the state seal for the "pelican in her piety" to have three drops of blood on her chest. However, in later years the tradition (on both the state flag and seal) had been haphazardly followed, which was noticed by an eighth-grader at Vandebilt Catholic High School in Houma who brought this to the attention of his state legislator. The issue was resolved in April 2006, when the Louisiana State Legislature passed a bill (House Bill 833/Act 92) which requires three drops of blood to be depicted on the pelican used in both the state's flag and seal. The new state flag, featuring a new design, was recently unveiled during swearing-in ceremonies of new state officials.

Flag of the King and Armed Forces of Spanish Empire, used in the Florida Parishes and Spanish Louisiana.

Flag of the Republic of Louisiana (of February 1861 CSA)

Pelican flag of 1861, used concurrently with the Louisiana Republic flag and the 1912 flag

More as per two photos of real flags.
Add a photo to this gallery

Proposals for a New Flag of Louisiana[edit | edit source]

Shown below are various flag designs that have been proposed for Louisiana.

Louisiana State Flag Symplistic Proposal. In 2006 Louisiana’s state legislature passed a bill requiring any depiction of the mother pelican in the state’s flag or seal be accompanied by a depiction of the three drops of blood with which she feeds her young. In my design the white bar on the left represents the mother pelican. The three stars are three drops of blood. The white triangle on the right is the young pelican’s beak. By Ed Mitchell. 2013.

Louisiana State Flag Proposal by NATHANIEL TANG on 13 JUNE 2015 at 05:40 UTC . Flag based on old New France regimental flags of the Royal French Army, defaced with arms with the pelican in her piety heraldic charge

Louisiana State Flag Proposal by NATHANIEL TANG on 13 JUNE 2015 at 14:40 UTC . The French Tri-couleur, defaced with arms with the pelican in her piety heraldic charge

Louisiana State Flag Proposal by NATHANIEL TANG on 13 JUNE 2015 at 14:40 UTC . The French Tri-couleur, defaced with four fleur-de-lis representing the pelican in her piety

Large FdL stands for the Peli and the 3 smaller for the chicks, 3 drops of blood and the mouth of the Mississippi River as wavey. Design by Rotten Ali. 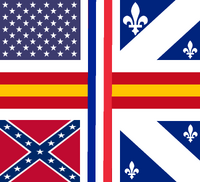 Update to number of stripes in Marmocet's design. The basic design of the flag is a very loose interpretation of the first official flag of the state dating to 1861. The red and gold represent Louisiana’s Spanish era while red, white, and fleur de lis represent the French era. The six gold stripes represent the six parishes of the state, and the five red bars the five governments in the state’s history: Spain, France, the UK, the CSA, and the USA. The blue canton with white fleur de lis abstractly represents the historic pelican flag of the state, whith the three leaves representing the words of the state’s motto: Union, Justice, Confidence. Posted by Preston Knapp [1]

Proposal "drop the banner" for a flag for Louisiana, reusing the image of the pelican from the existing flag, but doing away with the banner and the motto. By Qaz Dec 2019 (details)

In the Style of the Old MS Flag but with the Pelecan, Fleur-de-lis, Mardi Gras Crown, Acadian Star, Spanish Castle, and Senegal/Mali Star
Add a photo to this gallery

The fleur-de-lis is a very common heraldic symbol, but it is most well-known as a symbol of France, especially the Kingdom of France before the transition to a republic. It appears in many flags and other symbols in North America to represent French heritage; for example, the provincial flag of Quebec and the flags of the cities of St. Louis, Missouri and New Orleans, Louisiana.

Louisiana was part of the French colony of the same name, which spread over a much larger part of North America and was sold to the US in 1803. The state remains one of few that have French as second most spoken language, together with three New England states, and is home to the francophone region of Acadiana.

Besides the fleur-de-lis, the current flag of France (a vertical triband of blue, white and red) is also sometimes used or referred to in designs.

Besides France, greater Louisiana has been a territory of Spain for a few decades. Spain had ruled in parts of the current area of Louisiana previously. Several designs symbolize Louisiana having been a colony of both, representing Spain by the Cross of Burgundy (then used by Spain as its military flag), the castle and lion of Castile and León, or the red and yellow from the current flag of Spain.

Retrieved from "https://vexillology.fandom.com/wiki/Louisiana?oldid=39312"
Community content is available under CC-BY-SA unless otherwise noted.