For the federated state of the same name, see Mexico State.

The flag of Mexico (Spanish: Bandera de México) is a vertical tricolor of green, white, and red with the national coat of arms charged in the center of the white stripe. While the meaning of the colors has changed over time, these three colors were adopted by Mexico following independence from Spain during the country's War of Independence, and subsequent First Mexican Empire. The current flag was adopted in 1968, but the overall design has been used since 1821, when the First National Flag was created.

Red, white, and green are the colors of the national liberation army in Mexico. The central emblem is the Aztec pictogram for Tenochtitlan (now Mexico City), the center of the Aztec empire. It recalls the legend that inspired the Aztecs to settle on what was originally a lake-island. The form of the coat of arms was most recently revised in 1968. A ribbon in the national colors is at the bottom of the coat of arms. Throughout history, the flag has changed several times, as the design of the coat of arms and the length-width ratios of the flag have been modified. However, the coat of arms has had the same features throughout: an eagle, holding a serpent in its talon, is perched on top of a prickly pear cactus; the cactus is situated on a rock that rises above a lake. The coat of arms is derived from an Aztec legend that their gods told them to build a city where they spot an eagle on a nopal eating a serpent, which is now Mexico City. The current national flag is also used as the Mexican naval ensign by ships registered in Mexico. 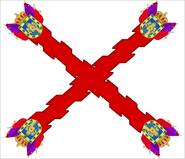 Proposals for a new national flag of Mexico[edit | edit source]

The seal is only golden, the white central area larger and the ratio is changed to 3:5, so that it fits the International set shown inside at the UN

Flag based on the three guarantees flag, using four eight-pointed stars representing the 32 Mexican States centered around the Mexican Federation represented by a simplified coat of arms in the middle (which represents the foundation of the city of Mexico-Tenochtitlan).

Design by "Flag Mashup Bot"
Add a photo to this gallery

Retrieved from "https://vexillology.fandom.com/wiki/Mexico?oldid=40349"
Community content is available under CC-BY-SA unless otherwise noted.