The flag of the State of Michoacán is, like most current Mexican state flags, the coat of arms centered on a white field.

The coat of arms of Michoacán is divided into four sections. The upper dexter field is red with a statue of José María Morelos, one of the most important figures in the war of independence. The upper sinister section shows three prehispanic crowns, which symbolize the three kingdoms that existed in the original territory of Michoacán, also on a red field.

The lower dexter section is charged with a factory, symbolizing the industry and advancement of the modern-day state. Lastly, the lower sinister field shows an image of the University of Tiripetio, considered to be the first University in the Americas, founded in 1540.

The shield has a blue border charged with sixteen stars. The motto on the bottom reads Heredamos Libertad - Legaremos Justicia Social ("We inherited freedom - We will bequeath social justice").

Proposals for new flag of MichoacánEdit

Proposed in 1996, inspired on the Purépecha (Tarasco) flag.

Design using the colors of the Purépecha flag, now including the Coat of Arms on a red field, like the one present on the top sections. By MetamarioMX. 2014.

Based on the colors of the Coat of Arms. By MetamarioMX. 2014.

The state's name means 'land of the fishermen'. Two bands represents the state's many waterways, specifically the Lerma and Balsas rivers. By kyrgyzzephyr. 2014.

Blue for its bodies of water and fishing culture, orange for the Day of the Dead and the Monarch Butterfly Sanctuary; and four flowers for its indigenous ethnic groups make up the Flag of Michoacán. By Ricardo Vazoli, 2016.

My flag of Michoacán features the colors of gold and red, for the flag of the capital, Morelia, plus the Spanish colonial heritage. The central charge is a stylized butterfly, an old symbol of Michoacán, in the style of native art. The swallowtail shape of the flag is both a reference to marine heritage (the state lies on the Pacific coast) and forms an M for Michoacán. jabask. 2017.

Proposal for a flag for Michoacán. By Qaz Dec 2019 (details) 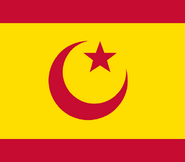 Flag of Michoacán The Symbol of Yellow Fish Green is Top Red is Normal Flag and Green is Bottom, February 2020
Add a photo to this gallery
Retrieved from "https://vexillology.fandom.com/wiki/Michoac%C3%A1n?oldid=33635"
Community content is available under CC-BY-SA unless otherwise noted.