Proposals for a New Flag of Minnesota[edit | edit source]

Updated Minnesota state flag proposal. Minnesota is nicknamed the “North Star State” and is also known as “Land of 10,000 Lakes.” The North Star is sitting in the middle of a blue circle which represents the lakes. By Ed Mitchell. 2016. 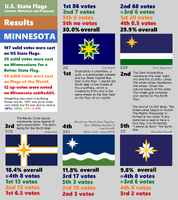 Proposed flag for Minnesota based on the nordic cross and a proposed official state color for Minnesota - PURPLE - in honor of Minnesota's most famous artist/performer, Prince.

Becker and Herold Flag with Real North Star, Scandinavian Snowflake and Purple Border
Add a photo to this gallery

Retrieved from "https://vexillology.fandom.com/wiki/Minnesota?oldid=39318"
Community content is available under CC-BY-SA unless otherwise noted.