On November 3, 2020, Mississippi voted on the In God We Trust (New Magnolia) flag to replace the old flag, Afterward, it was passed by the state legislature on January 6, 2021, and it became the official state flag of the U.S. state of Mississippi on January 11, 2021. The former flag was adopted by Mississippi in 1894, replacing the flag that had been adopted in 1861. It was the sole remaining U.S. state flag that bore the Confederate battle flag's saltire, from Georgia's adoption of a new flag in 2003 until the Mississippi flag was officially retired on June 30, 2020.

Prior to 1861, like most states, Mississippi had no state flag. When Mississippi declared its secession from the Union on January 9, 1861 near the start of the American Civil War, spectators in the balcony handed a Bonnie Blue Flag down to the Session Convention delegates on the floor, and one was raised over the capitol building in Jackson as a sign of independence.

Unofficial (likely post-war) variant
Add a photo to this gallery

The first official flag of Mississippi was known as the Magnolia Flag. It was the official flag of the state from 1861 until 1865 and it remained in use as an unofficial flag until 1894, when the current flag was adopted. On January 26 the delegates to the Secession Convention of the newly formed Sovereign Republic of Mississippi approved the report of a special committee that had been appointed to design a coat of arms and “a suitable flag.” The flag recommended by the committee was: “A Flag of white ground, a Magnolia tree in the centre, a blue field in the upper left hand corner with a white star in the centre, the Flag to be finished with a red border and a red fringe at the extremity of the Flag.” Due to time constraints and the pressure to raise “means for the defense of the state” the delegates actually neglected to officially adopt the flag in January, but did so when they reassembled in March.

The Magnolia Flag was not widely used or displayed during the Civil War, as the various Confederate flags were displayed more frequently. The Magnolia Flag remained the official state flag of Mississippi until 1865, when following the conclusion of the Civil War, a constitutional convention assembled in Jackson on August 22 began to revoke and repeal many of the actions taken by the Secession Convention of 1861. Among those repealed was the ordinance adopting a coat of arms and a state flag, leaving Mississippi without an official flag.

On February 7, 1894, the Legislature replaced the Civil War era Magnolia Flag with a new one designed by Edward N. Scudder. This second state flag consisted of three equal horizontal tribands of blue, white, and red, with the canton of the battle flag of the Army of Northern Virginia. The 13 stars on the state flag officially represented "the number of the original states of the Union"; though they are sometimes thought to have been for states that seceded from the Union, plus Missouri and Kentucky which had Union and Confederate governments.

In late June 2020, after mounting opposition to the state flag due to its inclusion of Confederate symbolism, Mississippi officially retired the flag and the state's governor announced that a new flag without Confederate imagery would be adopted. Later that month, Governor Tate Reeves appointed nine people to a commission to decide a new state flag for Mississippi. Using public submissions, the commission would determine the state flag by narrowing down the proposals until one has been decided, and then submit it to the state congress.

Proposals for a New Flag of Mississippi[edit | edit source]

Mississippi bicentennial flag (2017), used as an interim flag by some organizations

Mississippi State Flag Symplistic Proposal. I removed the confederate flag from the canton and replaced it with a star representing the state. By Ed Mitchell. 2013.

Blue and white triangle, representing the coming together of the great rivers. 19 stars, surrounding one large white star, showing Mississippi as the 20th state. The triangle is also the negative space iMississippi's place in an unseen "M," with colors showing Mississippi's historical place in both the Confederacy and the United States, without the use of the traditional "rebel" flag. By Will Allen King.

MS flag proposal #1 By Dean Thomas. Based on the 1928-1994 South Africa flag, the CSA Battle Flag is replaced with three flags: The Bonnie Blue flag which was Mississippi's 'National' flag after the state seceded in January 1861, A 20-star U.S. flag symbolizing that the state was the 20th to join the Union, and a 7-star CSA Stars-and-Bars, symbolizing Mississippi as one of the original 7 Confederate states.

MS Flag proposal #2 by Dean Thomas. The CSA Battle Flag is replaced by a vertical light blue stripe on the hoist side (representing the Mississippi River, which forms the western boundary of the state, and is what the state itself is named after). In the center of the White Stripe is a depiction of a magnolia tree.

Not my primary design, but one I have pride in due to the 20 blossom magnolia tree likeness and Bonnie Blue canton sat over border work. Design by Rotten Ali

Mississippi Flag Proposal #3 by Dean Thomas. The CSA battle flag is replaced by a centralized depiction of a stylized magnolia flower within a white-bordered blue disc. Note: I Borrowed BMoxey2's magnolia flower design for this flag. 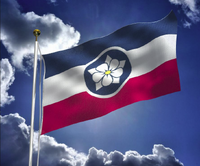 a variation on rotten ali design, maybe a better tree

This flag was proposed for Alabama, and can be seen on that state's page. It is a design by JJ Smith of "Graphicology", modified by Stephen Richard Barlow in 2015. I re-post it here and propose it as a better fit for Mississippi. This is a beautiful flag, rich in symbolism. It would represent a clean break with the past; leaving behind political controversy and historical baggage in favor of a clean sheet design. [Posted by Ken Morton]

Mississippi state flag designed by Ken Morton. This flag too would leave history and controversy behind with a mostly abstract design. The star represents Mississippi itself, while the red, white and blue roundel and stripes frame the star firmly within the symbolic traditions of American democracy.

My own version of a "Magnolia Flag." [Posted by Ken Morton]

Another 'Magnolia Flag', this one based upon the current Mississippi flag [Posted by Ken Morton]

Another proposal for a clean sheet design and another attempt at a break with history and politics. This flag is based upon an excellent design by Chris Sistrunk which I have modified by adding my own Magnolia flower and circle of twenty stars. [Posted by Ken Morton]

Perhaps a rather obvious solution to the 'problem' of the current Mississippi flag. And yet, there is much to be said for simplicity in design. Posted by Ken Morton [June 28, 2019].

Proposed flag for Mississippi - Blue and red bisections with a magnolia signal overlaid.

Follow the description voiced by someone in local seat of xtate government and you get this...

Larger aspect ratio, confederate battle flag replaced with a magnolia flower and a ring of 13 stars.

The Magnolia flower on the Stars and Bars

Designed to resemble the American Flag. The stripes stand for every letter in "Mississippi"

Larger blue field, canton charged with a magnolia flower and a ring of 13 stars.

Blue field with wavy pattern to represent the water. Canton charged with a magnolia flower.

Blue field with wavy pattern to represent the water. Canton charged with a magnolia flower and a ring of 13 stars..

A centered, square blue field. More authentic magnolia tepals with different shapes to simulate depth and the 3-dimensional structure. Bonus feature in the flower center: from afar, looks like a regular array of carpels, but up close, it is 20 golden stars in tight formation.

During the process where new designs are considered for a new state flag, US State Flags page on Facebook worked with the 147 designs elected to the official Round 2. These are our core results. Twice we have voted and twice the design of NcDinaldo has won - this is the better design of the 2nd round.

Updated redesign by SimplisticFlags, based on the old "Magnolia flag" and the "New Magnolia Flag" by Rocky Vaughn. (details)

Larger aspect ratio, confederate battle flag replaced with a magnolia flower and a ring of 13 stars with "In God We Trust" in the bottom.. 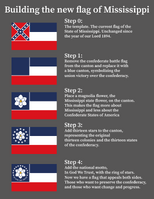 Step by step guide on how to make the new flag out of the old one.
Add a photo to this gallery

Retrieved from "https://vexillology.fandom.com/wiki/Mississippi?oldid=41737"
Community content is available under CC-BY-SA unless otherwise noted.