The flag of Missouri is a horizontal tricolor of of red, white and blue. These represent valor, purity, vigilance, and justice. The colors also reflect the state's historic status as part of French Louisiana. In the center white stripe is the Seal of Missouri, circled by a blue band containing 24 stars, symbolizing Missouri's admission as the 24th U.S. state. The flag is described in Section 010.020 of Missouri's Revised Statutes.

Except for the Seal of Missouri in its middle, the flag is identical with the Flag of the Netherlands; this resemblance is not, however, intended to denote any special relation between Missouri and the Netherlands.

In 2001, the North American Vexillological Association surveyed its members on the designs of the 72 US State, US Territory and Canadian province flags. The Missouri flag ranked in the bottom 25, 48th out of the 72.

Shown below are flags that have represented Missouri in some capacity or that are associated with the state's history in some way. 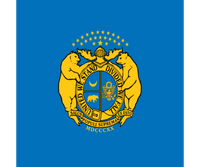 Missouri 24 star Militia Flag
Add a photo to this gallery

Proposals for a New Flag of Missouri

Shown below are designs that have been proposed for a new flag of Missouri.

24 stars on Octagon since Missouri has 8 neighbour states. Design by Rotten Ali.

My second design for a Missouri state flag, building upon a 2014 design by "Hans" - Posted by Ken Morton

Redesign of the Flag of Missouri by Sage .A. Rollins

Update to design by Ken Morton. The flag retains the spirit of the current flag with some updates. Red and white stripes traditionally represent valor and purity, respectively. The blue represents three things: the permanency, vigilance, and justice of the state. The colors also reflect the state's historic status as part of the French Louisiana (New France). The center white wavy stripe symbolizes the Missouri River and the historic east to west direction of migrants moving westward through the historic Gateway to the West. The center badge is an abstraction of the state seal, with the star repressing the sate and the round shape representing the Gateway Arch and its reflection onto the Mississippi River. Posted by Preston Knapp [1] 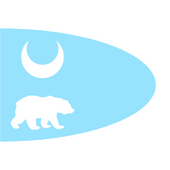 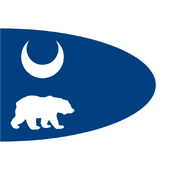 Proposal for a flag for Missouri. All colors are taken from the current Missouri flag (from the seal). The shapes represent the St. Louis arch, and the colors are brown for the woods, green for the fields and light blue for the river. By Qaz Dec 2019 (details)

Design for a Missouri state flag. A revision of an earlier design by "Motx72". (Posted byKen Morton)

This is my interpretation of the "banner of arms" of Missouri, as derived from the coat of arms, which I present here as an alternative to the state flag. To simplify the design, I reduced the number of colors to three. I did so by using the US coat of arms as found on the US Coast Guard Flag. I also replaced the bear, which lacks detail and looks like tired, with the bear found on the crest of Missouri Army National Guard coat of arms.
Add a photo to this gallery

The Gateway Arch is a monument in Jefferson National Expansion Memorial in St. Louis. Designed by Eero Saarinen, it is 192 m (630 ft) wide and tall (the tallest arch in the world) and was built in 1963–65, although Luther Ely Smith's original idea for the monument dates from 1933. Originally symbolizing the US's westward expansion, it has become a popular symbol of the city of St. Louis, as well as one of the state: it appears in the background on Missouri's state quarter.

Retrieved from "https://vexillology.fandom.com/wiki/Missouri?oldid=29631"
Community content is available under CC-BY-SA unless otherwise noted.