Proposals for a New Flag of Montana 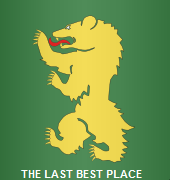 41 gold circles represent the admission order number of Montana. Blue field for Big Sky.
Add a photo to this gallery
Retrieved from "https://vexillology.fandom.com/wiki/Montana?oldid=29625"
Community content is available under CC-BY-SA unless otherwise noted.