The flag of the state of Nebraska is a blue cloth charged with the state seal. The current design was adopted in 1925. A previous design submitted in 1921 by a New York architect was rejected by the state government. The official designation of the design as the state flag occurred in 1963; Nebraska was one of the last states to adopt an official flag.

The Nebraska flag was rated in a survey by the North American Vexillological Association as 71st out of 72 U.S. and Canadian flags, making it the second-worst flag in the survey. The worst-ranked flag, the flag of Georgia, has since been changed. In 2002, the Nebraska Legislature's Government, Military and Veterans Affairs Committee discussed a bill that would have created a commission that would suggest new flag designs to the Legislature. The flag was not changed.

Proposals for a New Flag of Nebraska[]

Nebraska State Flag Symplistic Proposal. The blue is sky, and the white is the Great Plains. By Ed Mitchell. 2013.

Updated Nebraska state flag proposal. The red strip on the bottom half represents the great plains of Nebraska. The blue strip is the sky, and the white triangle represents its hills. By Ed Mitchell. 2016.

Nebraska Harvest Flag. Echo's of a combine harvester in a field. After display on Reddit one user liked the design so much he had a one-off T-shirt printed with this design - so it's already out and about in the state. Design by Rotten Ali.

Nebraska flag proposal by Dean Thomas. Flag based on topographical map of state.

GOLDENROD NEBRASKA STATE FLAG PROPOSAL / Evoking the state flower (goldenrod), the husking of corn, Great Plains sunshine, the prairie and the sandhills, this simple proposal follows all of the principles of good flag design, as well as those of traditional European heraldry. The thirteen piles (or points) reflect the thirteen stripes on the American flag. In technical heraldic terminology it could be blazoned (or described) as: Per bend, piley of thirteen throughout vert and or.

Nebraska state flag proposed by Ken Morton. The red, white and blue colors of this flag represent the earnest patriotism of this solid mid-western state. The overall design of the flag represents the state itself, with the red stripe symbolizing the Platte River running through Nebraska's southern tier.

Proposed flag for Nebraska, featuring the state Capitol building. In the end, I don't think this design works. I post it here mainly because it took so long to finish. (Posted by Ken Morton)

Another Nebraska state flag proposed by Ken Morton. In this flag, the thunderbird/eagle is an amalgam of designs found in murals located on the interior and exterior of the state Capitol in Lincoln. The yellow field represents the golden fields of wheat, corn and hay found throughout the state.

Public vote on Facebook - FOTW and US State Flags 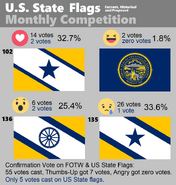 This slide indentified the further two options worked up since the contest concluded. A combo design and a cleaned up version - together with an SOB these were voted on in two places.

Another proposed flag for Nebraska. The Thunderbird is taken from a relief in the state capitol building. [Posted by Ken Morton]

Nebraska - A modified version of an outstanding design by Sam McKittrick. I have enlarged the pale and star on the hoist and added a border between the pale and upper fess. [Posted by Ken Morton]

Interpretation of a design by ironchefshark. Blue is for the state’s rivers, particularly the Platte River running across the state creating the rich wheat and corn fields represented by the gold color. The central star represents Nebraska’s place in America’s heartland. The grid of the flag mimics the floor plan of the iconic state capitol building. Posted by Preston Knapp [1]

Proposal "bands" for a flag for Nebraska, taking the color bands from the seal. By Qaz Dec 2019 (details)

Dark blue field and gold circle as a recognition of the past Nebraska flag. Light blue represents the Platte River. Dark blue reminds of the Ogallala Aquifer deep beneath the ground: the cornerstone of Nebraskan irrigation.

the 2 colors in this flag represent the current colors. the symbols and their meanings are. chimney rock is a historic land mark in the state. corn wheat and the sun are all agriculture because nebraska is an agriculture state. 1867 is when it was founded and the banner is the state's motto.

Nebraska Flag Proposal- first made in March 2021 by User:WesleyMcPaper

The Nebraskan Seal, with a white arrow symbolizing the correct orientation of the flag. Proposed by T.L. Francis 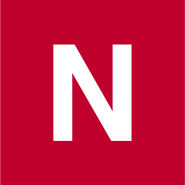 "The" Nebraska State Flag - a square shaped flag with a white helvetica "N" on a red field. taking cues from the Swis flag

FlagProposal2JM (Blue stars indicate 8 major rivers and 8 native tribes of Nebraska, sewer faces west as we were home to westward trails, gold for the harvest and blue for the Ogallala Aquifer)