The flag of the state of New Hampshire consists of the state seal centered on a blue background. The Great Seal depicts the frigate USS Raleigh and is surrounded by a laurel wreath with nine stars. The Raleigh is one of the first 13 warships sponsored by the Continental Congress for a new American navy, built in 1776, at Portsmouth. The seal is surrounded by a laurel wreath. The wreath is an ancient symbol of fame, honor, and victory. The nine stars within the wreath show that New Hampshire was the ninth state to join the Union. The water stands for the harbor of Portsmouth, and in the yellow-colored spit of land is granite, a strong igneous rock, representing both New Hampshire's rugged landscape and the sturdy character of her people.

At least one elected official has suggested replacing the state seal in the center of the flag with the Old Man of the Mountain, to memorialize its collapse in 2003, but no official action has been taken on the proposal.

Proposals for a New Flag of New HampshireEdit 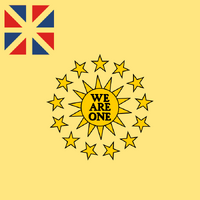 New Hampshire State Flag Symplistic Proposal. The number one represents New Hampshire’s status as the first colony to break away from Great Britain in 1776. By Ed Mitchell. 2013.

Updated New Hampshire state flag proposal. The flag features two blue strips to represent the two parts of its motto, “Live Free or Die.” In the middle is the profile of the “old man of the mountain,” also known as “Great Stone Face,” which is a potent symbol for New Hampshire. In 2003 it collapsed, and I wanted to commemorate it. The old man of the mountain is made of Conway granite, and New Hampshire is known as the “Granite State.” By Ed Mitchell. 2016.

New Hampshire state flag proposal by James Dignan, October 2015, based on the flag of the English county of Hampshire

A proposal for the Flag of NH designed by State Representative Caleb Q. Dyer. 5 stripes for the 5 original counties; alternating blue and green to signify the importance of our natural resources (sea, lakes, and forests). A white canton to signify the purity of the values of the state constitution and our peoples' commitment to peace and prosperity. A green pine to represent the Pine Tree Riot of 1772. 10 gold stars to represent the 10 counties of the state.

New Hampshire state flag proposed by Ken Morton. My original design had a blue field with thirteen stars set within a cross of Saint George, symbolizing both New Hampshire's status as one of the original thirteen states, and its history as one of the colonies of New England. However, that original design seemed to lack a proper visual balance, so I modified the cross of Saint George into a nordic cross.

The large triangle represents Mount Washington, the highest peak in the northeastern US and a source of considerable uniqueness and pride for NH and its people. Its green base represents NH’s many pristine forests and verdant fields. The dark blue, very similar to that of the current flag, represents the importance of water to the state - babbling brooks, resplendent lakes, and NH's small but vital coastline. The smaller white triangles on either side of Mount Washington represent not only other mountain peaks, but also can be viewed as sailboats peacefully drifting on NH's lakes and the Atlantic Ocean.

A sun with 9 rays represents NH's status as the 9th US State. Its position is a nod to NH's geographical setting in the northeastern United States. Three triangles represent the White Mountains, Mt. Washington at the center. The green and blue stripes stand for NH's forest and water resources, respectively.

The star's position is a nod to NH's geographical setting in the northeastern United States. Three triangles represent the White Mountains, Mt. Washington at the center. The 9 blue stripes stand for NH's water resources, and represent NH's status as 9th State to enter the US.

Snow-capped mountain to represent Mount Washington and the White Mountains, reflected in a blue lake. 9-pointed sun to represent NH's status as 9th US State. 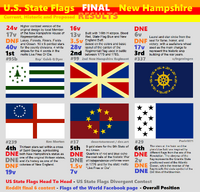 Results from the Facebook page US State Flags of the redesign study during May 2019.

The flag starts with the inverse base colors of the flag of Hampshire, England. A bundle of five white arrows, from New Hampshire’s original state seal is added to show the state’s egalitarian, rebellious spirit. The five arrows represent both the state’s original five counties and also the state’s “Live Free or Die” motto. Posted by Preston Knapp [1]

Buff flag
Add a photo to this gallery

The Second New Hampshire fought in the American Revolutionary War from 1775 to 1783. The unit fought at Boston, Trois-Rivières, Trenton, and Princeton, and was based at Fort Ticonderoga during 1776 and 1777. The fort was abandoned on July 5, 1777, in the face of advancing British troops. On July 8, British forces captured part of the regiment, including two regimental colors. The flags remained in the family of the British commander, Lt. Col. John Hill, for many years. Author Gherardi Davis located them in 1907 while doing research on early American regimental colors. In 1913 Edward Tuck bought them and donated them to the New Hampshire Historical Society, where they remain on display on either side of the main staircase. A number of proposals for a new state flag use elements from these colors.

The Old Man of the MountainEdit

The Old Man of the Mountain was an iconic rock formation in New Hampshire's White Mountains. In 1945 New Hampshire declared it the official state emblem, and it appears in official iconography such as state highway signs, the state quarter, state police cars, and logos for government departments. Signs that the Old Man was growing unstable were observed as early as 1906, and despite almost a century of efforts to preserve it, the entire formation collapsed on May 3, 2003. Shortly after that, there was a failed effort to redesign the state seal around the Old Man symbol.

New Hampshire's state tree is the paper birch. Some proposed flags contain symbols that represent the leaves or bark of this tree.

Some flag designs incorporate mountains or the color white to represent the White Mountains, a range covering about a quarter of New Hampshire that is the most rugged in New England.

Retrieved from "https://vexillology.fandom.com/wiki/New_Hampshire?oldid=33950"
Community content is available under CC-BY-SA unless otherwise noted.