The flag of the state of New Jersey includes the coat of arms of the state on a buff-colored background. According to the minutes of the New Jersey General Assembly for March 11, 1896, the date in which the Assembly officially approved the flag as the state emblem, the buff color is due indirectly to George Washington, who had ordered on October 2, 1779, that the uniform coats of the New Jersey Continental Line be dark (Jersey) blue, with buff facings. Buff-colored facings had until then been reserved only for his own uniform and those of other Continental generals and their aides. Then, on February 28, 1780, the Continental War Officers in Philadelphia directed that the uniform coat facings of all regiments were to be the same as the background color of the regiments' state flag.

The State seal in the center of the flag contains a horse's head. A helmet showing that New Jersey governs itself accordingly and three plows on a shield referring to the State's agriculture tradition, giving it the nickname "Garden State". The two Goddesses represent the State motto, "Liberty and Prosperity". Liberty is on the left. She is holding a staff with a liberty cap on it, and the word liberty underneath her. The goddess on the right is Ceres, goddess of agriculture. She is holding a cornucopia with prosperity written below her.

In 2001, the North American Vexillological Association surveyed its members on the designs of the 72 U.S. state, U.S. territorial and Canadian provincial flags. The survey ranked the flag of New Jersey barely out of the worst 25 flags, placing it as the 26-worst flag out of all 72, giving it a rank of 46 out of the 72.

In November 2015–February 2016, the New Jersey website nj.com held a contest to collect proposed New Jersey state flags. The ten finalists are shown below, in order of their final ranks. 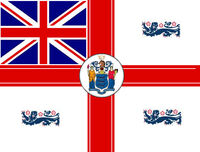 New Jersey State Flag Symplistic Proposal. The state motto is “Liberty and Prosperity.” The shield is liberty, and the arrow — pointing upward — is prosperity. By Ed Mitchell. 2013.

New Jersey State Flag Proposal by NATHANIEL TANG on 8 JUNE 2015 at 22:05 UTC. Flag based on the one of the Crown Dependency of Jersey in the English Channel, for which State is named, but replacing the arms of the Duke of Normandy (Queen Elizabeth II) with the shield from the arms of the State.

NJ was the third state of the Union thus has three stars on carry over buff. Blue star for the shield, orange and red for Liberty and Ceres. Design by Rotten Ali.

New Jersey state flag proposed by Ken Morton. This flag retains the colors of the current state flag. The three arms of the Y-shaped pall represent the three primary regions of New Jersey: the northern suburbs oriented eastward, towards New York City; the Jersey shore running to the south west; and the central corridor running across the middle of the state to Trenton and Princeton. 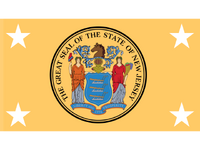 Based on a design by Hans. The flag of English Jersey contains a red saltire on white; the New Jersey flag has a saltire in the state colors of blue and buff. The three buff areas symbolize the three distinct regions of the state: North, Central, and South Jersey. The red triangle alludes to the Phrygian cap as well as the cornucopia, the items held by the supporters of the current arms, representing the state motto, "Liberty and prosperity”. The red triangle bordered by white also abstractly mimics the red and white lozenge in the arms of the original Lord Proprietor of the state Sir George Carteret. Posted by Preston Knapp [1]

Proposal for a flag for New Jersey. The plows in the middle part represents the shield, the buff color is taken from the old flag, left is orange for liberty and right is red for prosperity. By Qaz Dec 2019 (details) 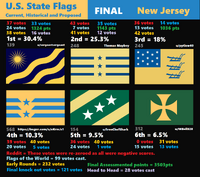 Results from the US State Flags Facebook page from a study of 665 images in Feb/Mar 2020.

Retrieved from "https://vexillology.fandom.com/wiki/New_Jersey?oldid=39592"
Community content is available under CC-BY-SA unless otherwise noted.