This page is about New York State. There is another page for New York City.

On April 8, 1896, the New York state legislature adopted a law making the coat of arms on a buff field the official state flag. The buff field was chosen because Major Asa Gardiner, the main proponent of the flag, argued that it should be of the facing color of uniform worn by troops. George Washington had ordered that troops from New York and New Jersey serving in the Continental Army wear buff facings.  However, the buff flag was unpopular, since the actual and more familiar custom at the time was for military flags to be blue with the coat of arms, as they had been for New York troops during and before the Civil War. Thus, the legislature changed the field from buff to blue by a law enacted on April 2, 1901.

The coat of arms as depicted on the flag has several minor differences from that on the state seal, or as it is shown in paintings for non-flag use. These are mainly in the treatment of the sun (squared off rays, no face on the disk) and in the simplification of the color palette for flag manufacture. [Text from FotW]

The coat of arms of the state flag was adopted in 1778 and the present flag is a modern version of a Revolutionary War regimental flag. The original is at the Albany Institute of History & Art.

In 2001, the North American Vexillological Association surveyed its members on the designs of the 72 U.S. state, U.S. territorial, and Canadian provincial flags. After the survey was completed, NAVA members chose the flag of New York to be ranked 53rd out of the 72.

In April 2020, the flag was modified to include "E PLURIBUS UNUM" on the coat of arms after a push was made by Governor Andrew Cuomo to send a unifying message in light of racial tensions following the death of George Floyd.

Proposals for a new flag of New York State[]

Shown below are various designs that have been proposed for a new New York State flag.

New York State Flag Simplistic Proposal. The Statue of Liberty’s crown has five points for the five states bordering the state and for New York City’s five boroughs. The red and white backwards “L” is a nod to the Union Jack and a reminder of what we can do when we band together. By Ed Mitchell. 2013.

New York State Flag Proposal. 50 Stars to represent the United States and drawn from the Jack of the United States, the Cross of St. George with the four lion are from the flag and arms of the City of York in Northern England, the White Rose of the House of York and of Yorkshire with the crown of Libertas (the lady of the Statue of Liberty). Proposal by Nathaniel Tang 06 JUNE 2015 at 23:07 UTC

New York State Flag Proposal. 50 Stars to represent the United States and drawn from the Jack of the United States, the Cross of St. George with the four lion are from the flag and arms of the City of York in Northern England, the White Rose of the House of York and of Yorkshire with the crown of Libertas (the lady of the Statue of Liberty), and the orange representing the Dutch who first colonized Manhatten. Proposal by Nathaniel Tang 08 JUNE 2015 at 01:15 UTC

New York Flag Proposal by Whiskrebellion, inspired by that of Stephen Richard Barlow.

"Official Blue and Gold Colors" New York City is orange but the state is gold on blue - no fuss - related much more to the Stars and Stripes with 11 for the order of admission. Design by Rotten Ali.

New York state flag proposed by Ken Morton. The thirteen stars on this flag represent New York's status as one of the original thirteen states. The blue field and compass represent the Atlantic Ocean crossings made by the ancestors of so many New Yorkers. Additionally, the compass symbolizes New York's state motto, "Excelsior", 'ever upwards'.

We were all thinking it. (Posted by Ken Morton)

Inspired by SonofSibir's design. The green and blue represents the east coast. The white pyramid represents the NYC skyline, with the rising East sun atop it, also representing the Statue of Liberty. By Dmitri McDonald, 2018.

Alternate version of my other design, without the green, also inspired by SonofSibir's design. By Dmitri McDonald, 2018.

Using Elements from Dutch "Prince's Flag" and Iroquois "Hiawatha Belt". Dimensions from New flag of Mauritania. Design by avrand. 1 of 3

Using Elements from Dutch "Prince's Flag" and Iroquois "Hiawatha Belt". Dimensions from New flag of Mauritania. Design by avrand. 2 of 3

Using Elements from Dutch "Prince's Flag" and Iroquois "Hiawatha Belt". Dimensions from New flag of Mauritania. Design by avrand. 3 of 3.

My version of a design by ColiopKolchovo. The basic elements of the flag depict the sun rising behind the Hudson River. The orange stars above reference the allegory figures Liberty and Justice in the state’s seal, while the blue star references the eagle and globe. Seven straight rays of the sun mirror the points of the Statue of Liberty’s crown, with the total of thirteen rays reference the state’s status as an original colony. The blue and orange colors are tied to the state’s Dutch and British colonial heritage. Posted by Preston Knapp [1]

Proposal for a flag for New York (state). The colors are derived from the old flag: blue for freedom, yellow for justice, and green for the natural beauty of the state. By Qaz Dec 2019 (details)

Proposal for a flag for New York (state). The image and colors are derived from the shield that is central to the current flag. Depicted are sea, woods, air and sun. By Qaz Dec 2019 (details)

The three stars represent Lady Liberty and Lady Justice on either side of the flag with the state of New York in the middle and also bear allusion to the state's coat of arms. Made by Ceasingmango426. 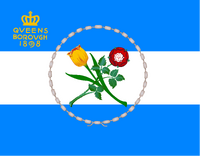 A large number of designs use the colors orange, white, and blue. These come from the Prinsenvlag (Prince's Flag), a Dutch flag first used in the Dutch Revolt during the late 16th century. The colors were first used by Prince William the Silent of Orange-Nassau. It served as the flag of the Netherlands until it was gradually replaced by the present design, with red instead of orange, in the mid-1600s. This is relevant to New York because the colony was founded by the Netherlands. It was called New Netherland from 1614 to 1674. New York City and Albany both use municipal flags based on the Prinsenvlag as a way to commemorate this colonial heritage.

The White Rose of York[]

The White Rose of York is a white heraldic rose which was adopted in the 14th century as an heraldic badge of the royal House of York. In modern times it is used more broadly as a symbol of the county of Yorkshire. New York takes its name from James, Duke of York, later King James II of England. In flag redesigns, the White Rose is intended to commemorate this connection.