The flag of North Dakota is the same as the flag used by the state military in the Spanish–American War and Philippine–American War in the 1890s, except for the state name at the bottom of the flag. It was adopted as state flag in 1911; the colors were officially specified to match those of the original military flag in 1943.

The flag consists of a blue field, with an eagle as main charge. Like the eagle on the Great Seal of the United States, the eagle on the flag of North Dakota holds thirteen arrows and an olive branch in its talons and a ribbon with the motto "E Pluribus Unum" in its beak, and bears a shield with thirteen red and white stripes and a blue chief. Above the eagle are thirteen stars and a sunburst; below it is a scroll bearing the state name.

Section 54-41-01 of the North Dakota Century Code specifies the design (blazon) of the coat of arms thus:

The allusions made in the arms are laid down in section 54-41-02 NDCC:

Proposals for a New Flag of North Dakota

North Dakota State Flag Simplistic Proposal. The northern state with sunshine to its south (South Dakota used to be known as the sunshine state). The design visually connects the two states. By Ed Mitchell. 2013.

In old gold you have divisions of 7 tepees like from the Sisseton and Wahpeton tribe. These ard colored as per the medicine wheel. Design by Rotten Ali.

At the time of admission the canton of the national flag had the last circular option. ND were one of 4 states then admitted and these stars are shown in the circle. Design by Rotten Ali.

Nordic Dakota. There is thought that the Norse got as far as ND so I guess this option is not too crazy. Design by Rotten Ali.

39 stripes in the current color set for ND being the 39th state of the union. Design by Rotten Ali.

ND with Nordic Cross in Gold. Star carries colors of the nameplate ribbon. Design by RottenAli. 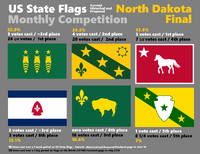 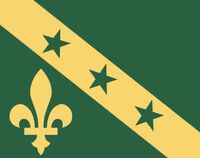 North Dakota
Add a photo to this gallery
Retrieved from "https://vexillology.fandom.com/wiki/North_Dakota?oldid=24164"
Community content is available under CC-BY-SA unless otherwise noted.