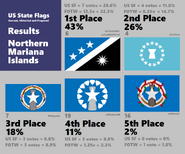 Set of 3 redesigns inc Guam and US Virgin Islands for the month of February 2019.
Add a photo to this gallery
Retrieved from "https://vexillology.fandom.com/wiki/Northern_Mariana_Islands?oldid=24833"
Community content is available under CC-BY-SA unless otherwise noted.