Mexico
The flag of the state of Oaxaca is, like most current Mexican state flags, the coat of arms centered on a white field.

The coat of arms of Oaxaca is a red parchment, which symbolizes the battles for freedom of the Oaxacan people. Above it, the national coat of arms of Mexico is shown. On the parchment are seven stars, representing the regions of the state. At the bottom is a ribbon with the words Estado Libre y Soberano de Oaxaca ("Free and Sovereign State of Oaxaca").

In the center is an elliptical shield, with in the border a quotation from Benito Juárez: El Respeto al Derecho Ajeno es la Paz ("Respect for the rights of others is peace"). The words are separated by representations of nopal, an old Oaxacan symbol of wealth.

The interior of the shield is divided in three sections. The upper dexter (left) section consists of stylized depictions of the fruits and flowers from the Leucaena leucocephala, a tree native to the region, and a stylized face of an Oaxaca native. The upper sinister (right) part shows a side view of a Mitla palace and the Dominican Cross. In the base section, two strong arms are depicted breaking a chain, which symbolizes the yearnings of the Oaxacan people in the conquest of its freedom.

Proposals for new flag of OaxacaEdit

Design based on the Coat of Arms. By MetamarioMX. 2014.

Design based on the colors of the flag of Mexico. By MetamarioMX. 2014.

Civil version of the design based on the colors of the flag of Mexico. By MetamarioMX. 2014.

The plant is a guaje, Oaxaca's namesake. The sixteen points are for the sixteen officially recognized indigenous peoples/cultures. By kyrgyzzephyr. 2014.

The architectonic fretwork of Mitla, the cultural wealth of 18 prehispanic ethnic groups and the Pacific Ocean make up the Flag of Oaxaca. By Ricardo Vazoli, 2016.

The red field represents the past struggles and bloodshed of the people of Oaxaca. The seven stars represent the seven regions of Oaxaca. The three white bars beneath the stars is a representation of Monte Albán, one of the earliest cities in Mesoamerica and was the centre of the ancient Zapotec civilization, the Zapotec people being one of the largest group of indigenous peoples of Oaxaca today. ao_z. 2017.

Proposal for a flag for Oaxaca. By Qaz Dec 2019 (details)

Proposal for a flag for Oaxaca. By Qaz Jan 2020 (details) 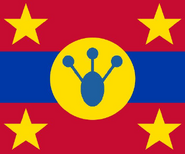 Flag of Oaxaca Blue Symbol of Oaxaca Shaped 4 Yellow Stars Red is Top and Red is Bottom, February 2020
Add a photo to this gallery
Retrieved from "https://vexillology.fandom.com/wiki/Oaxaca?oldid=33639"
Community content is available under CC-BY-SA unless otherwise noted.