The Ohio Burgee is the official flag of the U.S. state of Ohio. It was designed in 1901 by John Eisenmann for the Pan-American Exposition and adopted in 1902. It is the only non-rectangular U.S. state flag.

The Ohio state flag's design is defined in the Ohio Revised Code, section 5.01:

"The flag of the state shall be burgee-shaped. It shall have three red and two white horizontal stripes that represent the roads and waterways of the state. The union of the flag shall be seventeen five-pointed stars, white in a blue triangular field that represents the state's hills and valleys, the base of which shall be the staff end or vertical edge of the flag, and the apex of which shall be the center of the middle red stripe. The stars shall be grouped around a red disc superimposed upon a white circular "O." The thirteen stars grouped around the "O" represent the original states of the United States and the four stars added to the peak of the triangle symbolize that Ohio was the seventeenth state admitted to the union. The "O" represents the "O" in "Ohio" and suggests the state's nickname, the buckeye state. The proportional dimensions of the flag and of its various parts shall be according to the official design on file in the office of the secretary of state."

Proposals for New Flag of OhioEdit 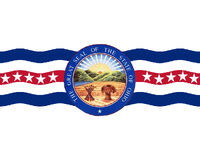 Ohio State Flag Simplistic Proposal. The sideways triangle represents hills and valleys, and the “O” is the buckeye and also “O” for Ohio. I reduced the number of stripes to three because I kept coming across threes in Ohio’s history (ex. admitted to the union in 1803). By Ed Mitchell. 2013.

Rectangle infills but in sky blue. Stars moved from point of triangle to the hoist. Design by Rotten Ali

Retrieved from "https://vexillology.fandom.com/wiki/Ohio?oldid=33577"
Community content is available under CC-BY-SA unless otherwise noted.