Proposals for a New Flag of Oklahoma[edit | edit source]

Updated Oklahoma state flag proposal. Oklahoma is based on the Choctaw words, “Olka Humma,” which translate to “red people.” The current flag has preserved the relationship between the Anglos and the Natives with an Osage shield crossed by a peace pipe and an olive branch. I wanted to preserve the idea of this relationship. This design is based on a Parfleche war shield. The points on the symbol represent some of the dominant tribes that I’ve in Oklahoma — Cheyenne, Kiowa-Comanche-Apache, Chickasaw, Choctaw, Muskogee (Creek), Cherokee, Osage, and Seminole. By Ed Mitchell. 2016. 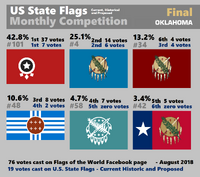 the color of “Waving Wheat” ready for harvesting, the right triangle shall be a medium green representing the eastern part of the state known as “Green Country” and the center triangle shall be the color of Oklahoma’s “Red Earth”. The year “1907” shall be in black text and geometrically centered in the upper left quadrant of the flag. A red, five-pointed star, with the number “46” geometrically centered in the star in black text, representing Oklahoma’s admission number to the United States, shall be placed in the geometric center of the upper right quadrant of the flag. The word “OKLAHOMA”, in all capital letters and white text, shall be horizontally centered near the bottom of and entirely in the red earth triangle. A solid black rectangle, representing the state’s highest elevation at Black Mesa, shall be located at the bottom left corner of the blue field. A solid blue rectangle, representing Oklahoma’s beautiful lakes, matching the color of the upper blue field of the flag, shall be located at the upper right corner of the green triangle. A detailed, computer rendered image of Oklahoma’s state bird, the scissortail fly-catcher in flight, flying up to the right and away from the viewer, shall be positioned at the center of the flag, overlapping over all four of the colored fields.

Retrieved from "https://vexillology.fandom.com/wiki/Oklahoma?oldid=38309"
Community content is available under CC-BY-SA unless otherwise noted.