The flag of Oregon is a navy blue field with lettering and symbols in gold, representing the state colors of Oregon. On the obverse, the legend STATE OF OREGON is written above the escutcheon from the Oregon state seal. The shield is surrounded by 33 stars, representing Oregon's admission to the Union as the 33rd state. Below the shield is written 1859, the year in which Oregon became a state.

On the reverse of the flag is a depiction, also in gold, of a beaver, the state animal of Oregon. Oregon has the only U.S. state flag with differing symbolism on two sides.

For dress or parade usage, the flag may feature a gold fringe. For standard usage, no fringe is required. The ratio of the flag's width to length is 3:5.

The current flag design became official on February 26, 1925. Oregon's flag is the last remaining state flag in the U.S. in which the obverse and reverse sides have different designs. Paraguay is the only country that still has a two-sided flag. Two-sided flags were previously more common, but have fallen out of favor due to inherently higher manufacturing costs relative to single-design flags.

Proposals for a New Flag of Oregon[edit | edit source]

Shown below are various designs that have been proposed for a new flag of Oregon.

In December 2008–January 2009, Oregon newspaper The Oregonian held a contest to collect proposed new Oregon state flags. The ten finalists are shown below.

OR Flag Proposal "Rogers and Truncale #1"

OR Flag Proposal "Rogers and Truncale #2"

Oregon State Flag Simplistic Proposal. The red triangle on the left represents the hills of Oregon. The state animal is a beaver. By Ed Mitchell. 2013.

OR flag proposal by 5thEye

Heavy redraw of the beaver from the logo of Parks Canada. Tail features all the small stars from the shield. Design by Parks Canada & Rotten Ali.

Oregon state flag proposed by Ken Morton. A simple cropping of the reverse of Oregon's current flag; with a hat tip to Oregon's neighbor, California.

The beaver totem is on the reverse side of the current flag. On the new flag it is front and center, with the addition of the star in the “northwest” corner of the flag to represent the state’s position on the map of the United States. Blue and gold are the official state colors. Posted by Preston Knapp [1]

Proposal for a flag for Oregon. Give the beaver solid ground to stand on. By Qaz Dec 2019 (details)

As previous, but with white stripe added to represent Mt Hood and the state's snow-covered peaks.

As above, with a more nautical teal at the hoist 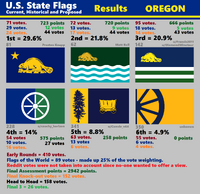 Contest to find the best redesign. Voted on 433 designs.

Flag of Oregon proposal. This flag has the colors of the Pacific Northwest (blue, white, and green) and the beaver in the blue field. Also, the texture on the flag reflect the Cascadian mountains looking out to the Pacific Ocean. By Ceasingmango426. August 2020.

Green White and Blue are colors that represent the Pacific Northwest. The Douglas Fir tree is a symbol of the state and grows all over the state

Retrieved from "https://vexillology.fandom.com/wiki/Oregon?oldid=39210"
Community content is available under CC-BY-SA unless otherwise noted.