1876 (Last modified in 1952)
Wikipedia article
Flags of the World article
The flag of Queensland was originally created as a colonial flag. It is made up of a British Blue Ensign with the state’s badge in the field. The badge is a blue Maltese Cross with the St. Edward’s Crown superimposed over it, representing the Governors position as the queen's representative.

The first variation of this flag used a badge depicting Queen Victoria’s head facing the fly and the words “Queensland” inscribed above it in gold. Due to difficulty producing the badge, a new badge similar to Queensland’s present badge was adopted in 1876. This badge was used until 1901, when the Crown was updated after Queen Victoria’s death. Since then the Crowns have been continuously updated to keep up with each change. 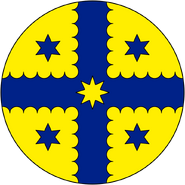 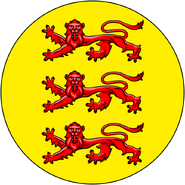 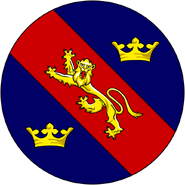 Proposal to replace 1870 badge
Add a photo to this gallery

Proposals for a new flag of Queensland

Golden Cross Flag by The Golden Wattle. The waved edges represent the eastern coastline and the maroon on the left represents the mainland. The Maltese Cross has been the badge of Queensland since 1876. Queensland's official colors are Maroon and Gold.
Add a photo to this gallery
Retrieved from "https://vexillology.fandom.com/wiki/Queensland?oldid=24318"
Community content is available under CC-BY-SA unless otherwise noted.