To add one or more flags to this list, please use the following format:

Originally posted by Vexilo at the Flags Forum. "Unfortunately the [current] flag fails to heed the good heraldic guidance of keeping metals apart with the consequence that the gold anchor is not so visible against a white base. And again there is a motto and scroll included in the design. So my suggestion is to make the back ground blue and of course to dispense with the scroll."

This flag is coincidentally very similar to the previous official state flag of Rhode Island from 1882 until 1897.

This flag was posted at Alternate History. Like several other state flag proposals by VT45, it is based on the arms of the state's founders, in this case Anne Hutchinson and Roger Williams. 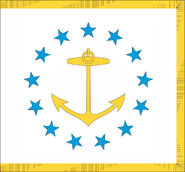 From Andy's "Your State Flag Stinks" blog: "Rhode Island. Nice and square. I like the color scheme, too. But that hope banner has to go. (...) [L]ook how pretty your flag is without it!"

Taken from his DeviantArt page. No description is given for this flag, but it is evidently a simplification of the current flag with the "Hope" ribbon removed and the color of the anchor changed to blue.

An alternate-reality flag posted on DeviantArt. Quoting from the description on that page: "Thirteen blue and white stripes mirroring the U.S. National flag, representing the 13 original colonies of which Rhode Island was a member. In the canton, a square panel with thirteen blue stars in a circle, and the iconic anchor from the Rhode Island coat of arms in gold placed in the center of those stars, along with the state motto on a banner below: "Hope"."

Posted by Philip in the Flags Forum: "The design features a blue field representing the ocean and the state nickname. Issuing from the hoist is a triangle that recalls the mainland portion of the state by referring to the triangle of the Eye of Providence and thus the 'Providence Plantations' part of the state’s formal name. Adjacent to this triangle is a red diamond shape that symbolises a red island - Rhode Island. Charged upon this island is the golden anchor that has been the emblem of the state since the C17th."

Self-uploaded without description. Like several other proposals it is similar to the current flag with the "Hope" banner removed; in this case blue fimbriation is added around the anchor and stars.

Self-uploaded without description; this flag includes the anchor and stars in the canton of a white field with a blue stripe at the bottom.

Self-uploaded without description; this flag consists of a blue field with a yellow anchor between two white horizontal stripes.

Part of the United We Stand project by Ed Mitchell of Bresslergroup. "I kept the design close to the original flag but simplified it and stripped away all the stars but one to represent the state itself."

Posted at the Sports Logos board. Like Edward O'Connor, BigRed618 based a new flag for each New England state on a flag associated with the New England region. "I kept as many elements as I could from the current flag. Some would say that the Ocean State's flag is perfect as it is, but I really wanted to see how it would look with the NE canton."

The first of my proposed flags of Rhode Island is a greatly simplified version of the current flag, keeping only the yellow anchor as charge. I replaced the yellow fringe with narrow yellow horizontal stripes on either side of the white field. Several later proposals use as main emblem thirteen stars arranged in the shape of an anchor.

From the file description page: "This is the flag of the First Rhode Island Regiment minus the text. This regiment fought during the Revolution. It uses all the elements of the current Rhode Island flag, but arranged differently and without the yellow-on-white color scheme, which violates traditional rules because it "pops" less than using contrasting colors. The First Rhode Island is famous as the first racially integrated military unit in American history, something definitely worth commemorating."

For these flags, I represented the two parts of the state by two vertical stripes: white for the Providence Plantations (which was founded as a place of religious liberty, as reflected in its name), and red for Rhode (Aquidneck) Island (the most popular etymology for which is the old Dutch translation of “red island”). The blue central stripe symbolizes the bays that separate them, as well as the state’s nickname, the Ocean State.

Retrieved from "https://vexillology.fandom.com/wiki/Rhode_Island/Proposals?oldid=13575"
Community content is available under CC-BY-SA unless otherwise noted.