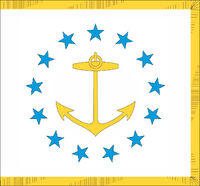 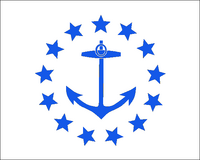 The anchor has been used to symbolize Rhode Island since the 1630s. The anchor is a maritime sign of hope, which makes reference to the state motto and its maritime history. The 13 stars symbolize the 13 original US colonies, of which Rhode Island was the thirteenth to ratify the Constitution. The gold border borrows from prior flags of the state. Posted by Preston Knapp [1]
Add a photo to this gallery
Retrieved from "https://vexillology.fandom.com/wiki/Rhode_Island?oldid=25821"
Community content is available under CC-BY-SA unless otherwise noted.