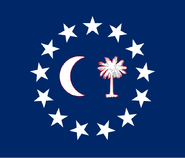 Proposal for a flag for South Carolina. By Qaz Dec 2019 (details)

just a simple take on the Citadel Tree. Tried to find the right balance with the crescent and blue shade (22-44-88)
Add a photo to this gallery
Retrieved from "https://vexillology.fandom.com/wiki/South_Carolina?oldid=31743"
Community content is available under CC-BY-SA unless otherwise noted.