The flag of the state of South Dakota is a field of sky blue charged with a navy blue and white version of the state seal in the center, surrounded by gold triangles representing sun rays, surrounded in turn by inscriptions in gold sans-serif capitals of "SOUTH DAKOTA" on top and "THE MOUNT RUSHMORE STATE" (the state nickname) on the bottom.

The first flag of South Dakota, adopted in 1909, consisted of a golden sun surrounded by the words "SOUTH DAKOTA" and "THE SUNSHINE STATE" on a blue field. In 1963, the seal was added, and in 1992, the inscription on the bottom was changed to the current one.

In January 2012, Representative Bernie Hunhoff sponsored a bill to adopt a new design for the state flag based on artwork by Dick Termes from Spearfish. Hunhoff introduced the bill on January 25, 2012; on February 6, the bill was amended to create the South Dakota State Flag Commission, which would have solicited submissions from the public for new flag designs and selected one to be considered by the 2013 legislature as the new state flag.

Immediately after being amended, the bill was "deferred to the 41st legislative day". Since the South Dakota legislative session is only 40 days long, this type of deferral effectively kills legislation.

Proposals for a New Flag of South Dakota

Shown below are designs that have been proposed for a new flag of South Dakota.

South Dakota State Flag Simplistic Proposal. It used to be known as the sunshine state. I also noticed the number two comes up a lot —the slogan has two parts, and the state was founded on November 2nd — so I represented it with two large color fields. By Ed Mitchell. 2013.

South Dakota Pure White Medicine Wheel on a Faile Field.Using a redraw of the Artist Faile's American Art pattern the MW is drawn only in white. The star is a carry over gold colour. Design by Rotten Ali.

South Dakota state flag proposed by Ken Morton. A simple bicolor in which black represents the buffalo and red the Lakota Sioux. (Also the flag of the now defunct, Kingdom of Wurttemberg.)

Proposal "shine" for a flag for South Dakota.

Same as above, with the inclusion of a howling coyote, SD state animal

Same as above but with coyote silhouette 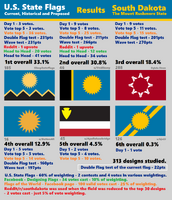 Results of the Competition between 313 designs during the month of December 2019.
Add a photo to this gallery
Retrieved from "https://vexillology.fandom.com/wiki/South_Dakota?oldid=28220"
Community content is available under CC-BY-SA unless otherwise noted.