17 May 1921
Wikipedia article
Flags of the World article

The flag of the United States Virgin Islands (USVI) is a white field charged with a golden eagle bearing the shield from the U.S. Great Seal, and the territory's initials "V" and "I". Like the eagle on the Great Seal, the eagle on the USVI flag holds an olive branch in its dexter talon and a bunch of arrows in its sinister talon; the number of arrows is reduced from thirteen to three, representing the USVI's three main islands. 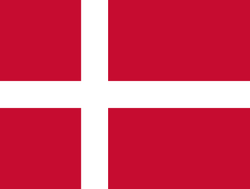 For hundreds of years, the US Virgin Islands were colonies of Denmark, which gives them a history unique in the Caribbean. After several unsuccessful attempts, Denmark established its first settlement on St. Thomas under the Danish West India Company. The company colonized St. John in 1718 and purchased St. Croix from France in 1733. The islands remained under Danish rule until the United States bought them in 1917. Danish voters (but not the islanders) had to approve the sale in a referendum. The islands have always been culturally English speaking, but this historical connection to Denmark is commemorated in the flag designs that include or allude to the Danish flag. 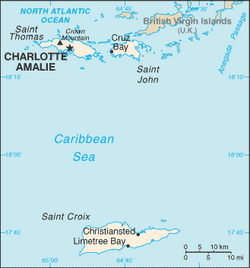 Retrieved from "https://vexillology.fandom.com/wiki/United_States_Virgin_Islands?oldid=15689"
Community content is available under CC-BY-SA unless otherwise noted.