Currently, four countries (Andorra, Chad, Moldova and Romania) use the same blue-yellow-red vertical triband as their flag; two of the flags contain the respective national coat of arms, while the other two are uncharged (and hence, effectively identical, although all four are very similar).

The flag of Andorra was a vertical bicolor of yellow and red until 1866, after which a blue stripe was added; the current triband symbolizes the historically influential bordering states of Spain and France. The coat of arms represents the rulers of the country: the two current co-princes on top (the mitre of Urgell, and the three bars of Foix, now represented by the president of France), and two former feudal lords at the bottom (the four bars of Aragon and the cows of Béarn).

My first few redesigns focused on the tricolor and the Catalan senyera (symbolizing Andorra as one of the Catalan Countries); most later ones use the three bars and mitre of the ruling county and bishopric.

Romania's and Moldova's are the only uncoincidentally similar flags of the four. The area of Moldova was part of Moldavia, one of the principalities that merged to form Romania, and was split off after cession to the Russian Empire. The flag of Moldova, designed a year before independence in 1991, is based on the Romanian national colors; the shield from the coat of arms derives from that of Moldavia, but has a red-blue background instead of a fully red one.

The third and fifth flags use the cross from the army flag; the rest use a bicolor like the coat of arms. The star from the first three is also from the arms, where it appears between the auroch's horns.

These designs for Romania use the aquila (eagle), the main charge of the coat of arms. #1 and #2 keep the triband (albeit rotated in #2); #3 is modelled after the cross-based flags for Moldova, using a yellow background instead of blue (inspired by the use of yellow as the color of most Romanian sports team kits).

After independence from the Soviet Union in 1991, Belarus initially returned to the white-red-white triband it had briefly used in 1918, before controversially adopting what is basically the Soviet-era flag without the hammer and sickle and star in 1995. My first redesign unifies the current red-green and former white-red-white by using a white-red-green tricolor; the patriarchial cross is from the 1991–1995 coat of arms. The second superimposes a white double cross on the current bicolor, combining with the red to hint at the 1991 flag.

The flags of Serbia and Croatia are similar in that they consist of their national coats of arms on a Pan-Slavic tricolor. Croatia's coat of arms is a red and white checkered pattern with five historical regional shields above it; Serbia's is a double-headed eagle bearing a smaller shield with the Serbian cross (a red field with a white cross between four letters Ve).

For both countries, my original proposals keep the central parts of the respective arms and move them to the canton, while the later versions use a centered shield like the current flags. Some later designs for Serbia are variations of the Serbian cross, while the third flag for Croatia combines its square pattern with its red-white-blue stripes (inspired by a flag for the "European Republic of Croatia").

The current flag was purposely designed to not have any Greek or Turkish symbols (crosses and crescents, red and blue), instead featuring a map of the island and olive branches on a white background, representing peace between the two ethnic groups. I combined a crescent and cross to hint at the alchemical symbol of copper ♀ (a.k.a. the Venus/female symbol), keeping the current colors of white, green and copper (except in the last flag, which resembles Kofi Annan's proposal).

Instead of doing a normal banner-of-arms for Hungary, I merged the two halves of the coat of arms and placed the cross, hills and crown on the red and white stripes.

Liechtenstein's flag used to be plain blue-red, until it was discovered at the 1936 Olympics that the same bicolor was used by Haiti and a crown was added for distinction. The yellow-red from these four flags is from the (lesser) national arms, which is placed in the canton of a fimbriated blue-red bicolor in the first two and combined with the current bicolor and crown in the other two.

The charges on these flags for Lithuania are respectively the Columns of Gediminas and the double cross from the Vytis (currently used as the national coat of arms). Both are medieval symbols of the country and were used as independentist symbols during Soviet years. The colors are those from the current flag.

This flag was created for the 100th /r/vexillology monthly contest (ending in 17th place), and specifically intended as a military or naval flag, though it might work as a national flag as well.

A year ago, the sub's contest concerned national war flags and ensigns. This flag for Lithuania mirrors the swallowtail design used by many northern and central European countries for their state, war and/or naval flags (including the Nordics, Germany, Estonia and Poland), and displays a national symbol referred to as the Columns of Gediminas, using the national flag colors of yellow, green and red.

The flag of Malta includes the George Cross, a British medal granted to the country in 1942, in the canton. It is, however, so small that its details are just about invisible on a flying flag, so I made some redesigns that replace it with a Maltese cross, a Maltese symbol currently used on the civil ensign.

The flags of Monaco and Indonesia are both horizontal bicolors of red and white. The sole difference is their aspect ratio (4:5 versus 2:3), but because Monaco's official 4:5 ratio is rarely used in practice, they are de facto identical. Both are also very similar to the flag of Poland (with the same colors inverted) and many non-national flags.

My redesigns for Monaco combine the current bicolor with a lozenge pattern, based on Monaco's coat of arms and unofficial alternate flag, the latter of which would be a great replacement itself. The proposal for Poland uses the cross pattée from the naval jack, with the eagle from the national coat of arms replacing the arm and sword.

The first three of these proposals for Montenegro are respectively a banner of arms, the current red and gold flag with a cross pattée, and the historical tricolor (similar to but distinct from the Serbian tricolor) with the cross. The fourth references the fact that both the endonym "Crna Gora" and exonym "Montenegro" literally mean "black mountain".

All of these designs include one of the current flag's quinas (small blue shields with white dots), since they are the oldest and arguably most unique of the symbols on the flag, having been included since the 12th century. #3 and #4 both use a blue cross with quina dots, referencing the very first Portuguese royal banner (a blue cross on white). #3 specifically uses the Order of Christ, a symbol of the Portuguese overseas empire, similarly to the current flag's armillary sphere (a stylized version of which is kept in the two newest designs).

I purposely kept the republican green and red background instead of the monarchical blue and white (which seems to be more popular in flag redesigns); #6 is a version of #5 using the latter color scheme.

Based on an earlier own proposal from November 2013, this proposal is basically a stylized banner of San Marino's coat of arms, which is included on its flag. It features three towers, each on a hill and with an ostrich feather on top.

Both the Slovak and Slovenian flags are essentially the Russian tricolor with national coat of arms. These redesigns for Slovakia use the double cross and mountains from the coat of arms. Although not originally intentional, the triangles make the flag somewhat reminiscent of the Czech and Czechoslovak flag, without being too similar. 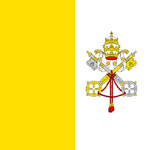 The flag of Vatican City is a square vertical bicolor of yellow and white, charged with the main part of the coat of arms: the crossed keys of Saint Peter and the papal tiara. The shown proposals each keep and simplify the silver and gold keys; the first moves them to a red circle in the center (the red referencing the background of the coat of arms), while #3 and #4 make use of counterchanging. The fifth flag is modelled after the Italian tricolor, but it offers the possibility of cutting off the red stripe in order to obtain essentially a simplified rendition of the current flag (including its square proportions).

Retrieved from "https://vexillology.fandom.com/wiki/User:HansLN/Proposals/National/Europe?oldid=31318"
Community content is available under CC-BY-SA unless otherwise noted.