Like the flags of Oklahoma, Indiana and Nevada, the current flag of North Dakota was created independently of the state seal and does not contain it, but still consists of a complicated emblem, incorporating the state name, on a blue field. Though the flag has its history (it is based on one used by the state's army in the wars with Spain and the Philippines around 1900), it contains only American symbols rather than state-specific ones.

My first proposal was a banner of the state coat of arms, which is different from both the current flag and the seal. It is yellow with a green diagonal stripe (bend) charged with three yellow stars, and a green fleur-de-lis below the bend. Ben Karnell proposed a coincidentally identical flag design. Two later versions flip the flag vertically, so the fleur-de-lis is in the canton (second proposal), and add the arrowhead shape from the coat of arms (third). The fourth proposal combines the elements of the coat of arms with the blue background from the current flag.

Similar to the blue-with-sunflower flags for Kansas, a blue flag with the sun from the current flag is often proposed as a new state flag for South Dakota, and was also my original proposal. Such flags for SD and Kansas are however barely distinguishable from each other if flying. Additionally, the nickname "Sunshine State", which the sun refers to, is no longer official and is now mainly used by Florida instead.

My January 2014 South Dakota flag proposal is blue with a white-bordered red diagonal stripe and a four-pointed white star in the canton. The white star represents Mount Rushmore (SD's new nickname, shown on the current flag, is the "Mount Rushmore State") and the four U.S. presidents it depicts. The number four also symbolizes South Dakota being generally listed as the fortieth state to join the United States (it may also have been the 39th, since no-one knows which Dakota joined first). I can't recall if I added the red and white stripes for any reason other than to not have a solid blue background. A second version uses four five-pointed stars instead of the four-pointed star, while a third combines the white four-pointed star with the sun from the current flag. 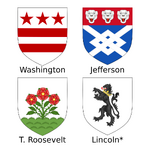 Coats of arms of the four presidents (* Dubious)

These flags symbolize Mount Rushmore by stripes in the main colors of the coats of arms of each of the four depicted presidents: red and white for Washington, blue and white for Jefferson, green and white for Roosevelt, and black and white for Lincoln (the latter of which doesn't have a good source, but those colors seem to be associated with him either way). Proposals 4 through 6 include the Sunshine State sun; 6 and 7 incorporate the Native American medicine wheel symbol. The wheel in #6 is formed by the state's initials "sd", an idea by BigRed618.

These flags are part of an attempt at designing sets of similar flags for the similarly-named states (see also the Carolinas). I realized I didn't have to change much in my flags for the Dakotas, as my first two flags for South Dakota coincidentally share several features with my proposals for North Dakota: a diagonal stripe and a charge in the canton. Based on my original set of South Dakotan flags, I added an arrowhead similar to the one in my latest few North Dakotan flags in the canton, representing the Dakota and other Native American tribes that have inhabited the state. The arrowhead is charged with four stars in the Mount Rushmore presidents' colors, or in all blue in the second version.

Like several others, I based my newest proposal for Illinois on the centennial flag, which was designed in 1918 to celebrate the state's one hundredth birthday. I rotated the blue stripe to resemble an "I" and added small red stripes to make the flag somewhat more interesting and to allude to the national flag. The number of small stars is reduced from twenty (representing the twenty states to join before Illinois) to four, keeping the twenty-states symbolism in the number of star points.

The current flag of Indiana is a blue field charged with a torch, nineteen stars and the state's name, all in gold. While just removing the word "Indiana" would already be an improvement, I think the many stars in circular patterns make the flag rather complicated, and it is no different from most other US state flags in that it is an emblem on a blue field. My first proposal was a blue-gold-blue vertical tricolor; the hoist stripe is charged with the torch and large star from the current flag.

The horizontal white stripes on the final version of this proposal resemble highways, referring to Indiana's nickname of the Crossroads of America, and the blue stripe between them represents the state's main river (both are official state symbols). The flag furthermore includes the torch from the current flag, and a six-pointed star to represent Indiana being the sixth state chronologically after the original thirteen (the symbolism of the inner six stars on the current flag).

The thirteen red and green stripes from my third and fourth proposals are from the historic George Rogers Clark Flag. Two of about thirty variations created, one charges the Clark flag with a gold torch, a semicircle of five white stars and a centered big star (similar to the current flag), while the other adds white fimbriation and a white torch.

My first attempt at a new flag for Iowa on 1 February replaces the emblems on the central stripe with a fleur-de-lis, a medieval symbol of France, with the same symbolism as the blue-white-red tricolor. This however removes all American symbolism (the eagle), resulting in a flag that could as well be a new national flag of France itself.

The emblem on the displayed proposal is a monogram of the letters "IOWA", colored blue and red. The blue part kind of resembles a fire, or a coin telescope view of a set of mountains, while the red part looks like the top view of a plough.

A modification of this flag in January 2015 puts the monogram emblem on a bordered white background. The border is blue on the hoist and fly sides, representing Iowa being the only state that is bounded on both its east and west side by rivers (four others' proposals on the Iowa page symbolize this fact by blue stripes), and red at the top and bottom.

This is a version of an existing set of proposals by Ben Karnell, who proposes replacing the eagle and text of the current Iowan flag with a brown, red or black hawk, referencing Iowa's "Hawkeye State" nickname. My version uses blue-white-red-white-blue vertical stripes and a white hawk silhouette, with the blue stripes on both sides again representing the Missouri and Mississippi rivers that longitudinally border Iowa. It still references the French flag in its background colors, without being too similar to it.

The sunflower is a popular emblem for the state of Kansas, being its state flower and nickname. I first used a sunflower on a blue field as proposal, but added yellow stripes for distinguishability. The number of petals (thirteen inner, twenty-one outer) symbolizes Kansas' chronological position as 34th state.

My new proposals for Michigan are an attempt at incorporating the three mottos on its coat of arms into a wordless flag. Blue stripes represent the Great Lakes (including their quantity in the first version, even though only four of the five lakes border the state). Two green stripes represent the two peninsulas, and hence the state motto "Si quæris peninsulam amœnam circumspice". The shield carries the symbolism of "Tuebor" and the guy with the gun on the current seal (the ability to defend one's rights), while a white star represents Michigan's statehood as well as the US motto "E pluribus unum".

Proposals 3 and 4 also represent the two peninsulas by green rectangles, but in a more geographically accurate way. 4 includes all five lakes as fields of blue, of which all but one touch either peninsula; for completion, the white bars may be taken to symbolize the land/river borders of both peninsulas with Canada. The antlers in 3 represent the elk and moose, which on the current flag represent the state's wildlife as well as the Hudson's Bay Company. The intention of the version with raised star was for the negative space to suggest a shield shape.

Based on my previous modification of a 2012 flag by Steve Lovelace, this redesign for Minnesota could work if purple was accepted as the state color (as which it was recently proposed in honor of Prince, who died in April 2016). Lovelace's original flag has a Nordic cross for the state's many Scandinavian Americans and a star representing the North Star (Minnesota's motto and nickname).

For Missouri I kept the red-white-blue tricolor it currently uses, but narrowed the white stripe to dissimilate it from the Dutch and other red-white-blue flags. The crescent and bear silhouette are from the central part of the seal.

Same symbols and colors, but with a white elliptical shape representing the Gateway Arch.

Each proposal being a horizontal tricolor in the colors of the current flag of Nebraska (blue, gold and bluish grey), they reference the state name's origin as "flat water". The inverted second version is based on earlier non-own proposals, in that it uses blue over gold stripes to symbolize a landscape of blue skies over wheat fields, as is the third, which includes an ear of corn in reference to Nebraska's "Cornhusker State" nickname.

The badger, Wisconsin's state animal, features on its current flag and coat of arms as a crest as well as being the state's nickname. This flag also uses the coat of arms' gold and black colors, three stripes representing Wisconsin as the 30th state, and red for the most probable origin of the state name, an Algonquian term for the Wisconsin River's red sandstone banks.

Retrieved from "https://vexillology.fandom.com/wiki/User:HansLN/Proposals/Subnational/US/Midwest?oldid=38270"
Community content is available under CC-BY-SA unless otherwise noted.