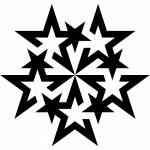 My name is Qaz Janssen. I am a computer programmer, but recently I've been triggered by Roman Mars' inspiring Ted talk about vexillology to take up this old hobby of mine.

I started making my designs by creating.png's using the GIMP, but after doing some 80+ designs I realized that any flag worth flying needs to have at least an .svg design. Therefore I've converted all (but one) of my designs to .svg, and intend to only create .svg's from now on.

To me flag design is a balancing act between cherishing the colors and symbols that people know and are attached to, creating something that is pleasing to the eye and daring to stand out. The one thing that I hope can be said of all of my designs, is that they are all different.

Although an entity can stand out with a flag that doesn't obey standard proportions (like very long, or square), this is notably unpractical when the flag is used together with other flags. Therefore in principle all my designs will be proportioned 3:2 - although I've already made an exception for a 1:1 flag for Guerrero..

As a general rule I try to reuse the colors and symbols that I find on current or old flags or shields. The problem with many of those is, that they would like to tell you everything there is to know about an area, but in the process fail to say what makes that area different from other areas. Sometimes new symbols (flowers, buildings) can be found elsewhere.

A perfectly placed star can be a thing of beauty, but sadly there is a tendency to overuse them. Many states have a single star to symbolize that they're a state - which does not really discern them from all other states. Even worse is the habit to fill a flag with dozens of stars "to symbolize the fact that we were the 67th member of the union". Nobody has time to count those, so the informational value of those stars is zero, and they are better left out. The only exception to that rule would be the flag of Indiana, where the stars are craftfully assembled into a thing of beauty.

I think it's important that, if stars are needed, care is taken to use the right kind of star - especially when stars are taken from the existing flag or shield. A star may have 5, 6 or n points, and it can be a normal, a fat or a skinny star.

All of my proposals fall in one of two categories:

I will try to say something (hopefully useful) about all of my current designs in the following pages: