Proposals for a New Flag of Utah[edit | edit source]

Updated Utah state flag proposal. Utah’s motto is “Industry” which is commonly represented by a beehive. I used a hexagon to represent the idea of industry since hexagons are a shape commonly found in our modern industry (nuts and bolts) and are also the shape of the cell structure of honeycomb. The hexagon sits in a blue strip which represents the great Salt Lake. By Ed Mitchell. 2016. 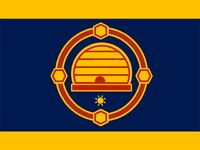 Gold beehive in canton on sky blue background. White stripe for snow and salt, gold stripe for the landscapes in southern Utah 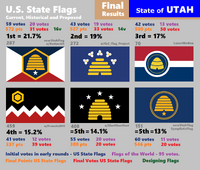 Results page for the Utah contest - 786 designs - these were the top 6.

Retrieved from "https://vexillology.fandom.com/wiki/Utah?oldid=39316"
Community content is available under CC-BY-SA unless otherwise noted.