Proposals for a New Flag of Washington[]

Washington flag proposal 3 by Hans. Based on a Virginia proposal by Iserlohn. Sep 2015. (details & more versions) 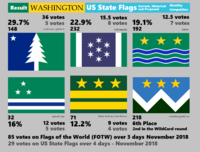 Green represents the state's lush forests. Blue represents the waters of the puget sound and columbia river. White represents the eternal blanket of clouds that cover the state. The orca is a popular symbol for the native tribes and is a native mammal to the area

Washington is separated from east to west by the Cascade Mountain Range. Eastern Washington is generally much drier, and the population is smaller and more spread out than the western region. Reflecting this uniqueness, a separate regional flag (such as the one below) may serve as an informal source of pride.