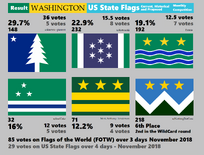 Proposal "Rainier" for a flag for the state of Washington, showing Washington's head in yellow and mount rainier in white on a green background.
Add a photo to this gallery

Retrieved from "https://vexillology.fandom.com/wiki/Washington?oldid=25849"
Community content is available under CC-BY-SA unless otherwise noted.