The obverse side of the seal bears the legend "State of West Virginia" together with the state motto, Montani Semper Liberi ("mountaineers are always free"). A farmer stands to the left and miner to the right of a large ivy draped rock bearing the date of the state's admission to the Union, June 20, 1863. In front of the rock lie two rifles upon which rests a red Phrygian cap, or cap of liberty. The lower half of the coat of arms is wreathed by the rhododendron, the state flower. The white stands for purity while the blue border represents the Union.

Proposals for a New Flag of West Virginia[edit | edit source]

West Virginia State Flag Simplistic Proposal. The diagonal red triangle on the bottom represents the side of a mountain, and the star is a mountaineer. The state motto: “Mountaineers Are Always Free.” By Ed Mitchell. 2013.

West Virginia Flag by "ZeekLTK" - colors from the two people in the seal (one wearing all yellow, the other red/blue) with axe and rifle

W for West in Red. V for Virginia in Blue. Where they cross purple. 34 various sized area sections of color to represent the number of states on admission of West Virginia. Light blue hollow star to represent the many lives lost in the civil war. Retension of blue border. Design by Rotten Ali.

West Virginia state flag proposed by Ken Morton - "Above and Below" 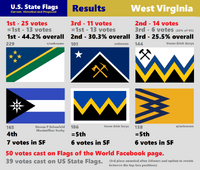 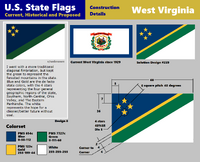 My version of designs by SimplisticFlags and Hans. he blue border is from the current flag and the colors are the official state colors (old gold and blue). The red flowers are based on the family arms of Francis H. Pierpont, the "Father of West Virginia.” The seven flowers with five petals represent the West Virginia's order of admission (35th). The arrangement of the flowers abstractly spells “WV." Posted by Preston Knapp [1]

Proposal for a flag for West Virginia. All colors taken from the current flag. By Qaz Dec 2019 (details)

Proposal for a flag for West Virginia. By Qaz Jan 2020 (details)

Green representing the mountains, the state flower on the corner. 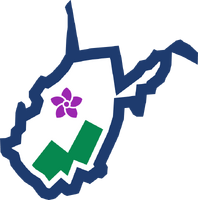 Flag Sticker
Add a photo to this gallery

Retrieved from "https://vexillology.fandom.com/wiki/West_Virginia?oldid=38148"
Community content is available under CC-BY-SA unless otherwise noted.