Free and Sovereign State of Yucatán

Mexico
Wikipedia article
The flag of the state of Yucatán is, like most current Mexican state flags, the coat of arms centred on a white field.

The coat of arms of Yucatán was officially adopted in 1989. The main field is green and shows a golden deer in the center, a golden sun in the upper sinister corner and a golden henequen plant in the base. It has a golden border charged with two Mayan arches on the dexter and sinister sides and two Spanish bell gables in chief and in base.

The Flag of the Republic of Yucatán (1841–1848) is still flown today as a civil symbol.
Add a photo to this gallery

Proposals for new flag of YucatánEdit

While this may look like the flag of John Deere, the colours and deer are from the coat of arms. The deer represents the native Mayan people. By kyrgyzzephyr. 2014.

The Kukulcán Pyramid as a symbol of Mayan culture, shines at the centre of the flag of Yucatán, at the same time the Caribbean Sea is located to the north. By Ricardo Vazoli, 2016.

This flag uses the green from the state's Coat of Arms, in combination with limestone and white. It features a cross, identifying the Yucatan's large Catholic population. Four henequén (also known as Agave) plants point towards the center square- which represents Mérida, the Capital, nicknamed 'The White City'. These symbols come together to make an abstract version of El Castillo, a noteworthy pyramid built by the Mayans between the 9th and 12th centuries. strangest_stranger. 2017.

The flag uses green and gold, which is used on the Coat of Arms of Yucatán, as well as blue. Blue represents the States location at the Caribbean see and the states lakes and rivers. The central emblem is a stylized, aerial depiction of the Temple of Kuhulkán, the famous pyramid of Chichén Itzá. Torchonium. 2017.

A flag for the Mexican state of Yucatán. The green and beige derive from the Seal of Yucatán and represent nature and peace. The white-tailed deer, which also features on the Seal, represents the state itself and it is surrounded by 5 stars for the 5 departments of the Republic of Yucatán, which declared indepedence from Mexico in 1841. Finally, the two bars represent the state's twin Mayan and Mexican identities. NaynHS. 2017.

Though people of Yucatan already relate to the awesome flag of the Republic of Yucatan, this simple flag design incorporates the colors and sun of their coat of arm. rede_shakks. 2017. 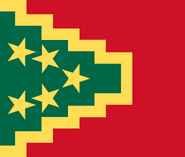 Yucatan was known as a very important place for the Maya peoples. They built cities such as Chichen Itza in the state. For this reason I've made a prominent feature of the flag a step-pyramid style thing, sort of like the Czech Republic I suppose. The colours are taken from two sources, the first being the Flag of the Republic of Yucatan and the Coat of arms, which is where the idea for a yellow-gold colour comes from. The five stars are also from the Republic's flag and represent the five regions of Yucatan. Note, the flag isn't actually a square, it is 1300 wide by 1100 tall, this was to make the step pyramid part a prominent feature rather than more of a canton type thing. Imperito. 2017.

Proposal for a flag for Yucatán. By Qaz Jan 2020 (details)

Proposal for a flag for Yucatán. By Qaz Jan 2020 (details)

Flag of Yucatan a Blue Background Yellow and Green Circle Yellow Pyramid is Top, February 2020
Add a photo to this gallery

Retrieved from "https://vexillology.fandom.com/wiki/Yucat%C3%A1n?oldid=33725"
Community content is available under CC-BY-SA unless otherwise noted.